Class A self-storage facility near USC 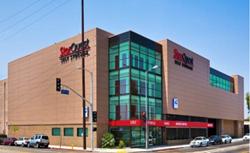 Our relationship with Talonvest is built on trust, respect and their ability to deliver. Choosing them as our financing broker is a decision that we make with confidence and ease.” Clark Porter, President of The William Warren Group

Talonvest Capital, Inc., a boutique self storage and commercial real estate advisor, negotiated a $22,180,000 non-recourse, 10-year fixed rate, interest only loan on behalf of William Warren Group. The loan is secured by a Class A self-storage facility located at 3707 South Hill Street in Los Angeles, CA. The 111,476 square foot secure, access-controlled property was built in 2009, has 1,588 climate-controlled storage units, and is situated just off the 110 freeway within a half mile of The University of Southern California. The area surrounding USC is at the hub of development activity with popular developments such as the new University Village, the Los Angeles Football Club’s Banc of California Soccer Stadium, and the George Lucas Museum.

The cash out, securitized loan was negotiated with a large national bank. As a result of an orchestrated competitive bid, Talonvest was able to negotiate a 7.75% debt yield requirement from the lender, resulting in maximum loan proceeds for the borrower. Clark Porter, President of The William Warren Group, shared “Our relationship with Talonvest is built on trust, respect and their ability to deliver. Choosing them as our financing broker is a decision that we make with confidence and ease.” The Talonvest team responsible for this assignment included Kim Leslie, Eric Snyder, and Terra Hendrich.

About Talonvest Capital, Inc.
Talonvest Capital is a boutique real estate firm providing advisory services to self storage and commercial real estate investors, owners and developers nationally. The firm utilizes a unique, collaborative team approach, emphasizing the institutional knowledge and expertise gained over the past four decades by its team members, to deliver better capital solutions for its clients.

About StorQuest Self Storage
StorQuest Self Storage is the operating trade name of self storage properties owned and operated by The William Warren Group, Inc. (WWG). WWG is a privately held, entrepreneurial self storage development, acquisition and management company. WWG was founded in 1994 to take advantage of opportunities in the self storage industry. Today, StorQuest owns and manages over 125 properties across the United States and has approximately 20 under development. StorQuest is a top 5 private owner/operator in the country.