Kenneth C. Walker and Susan L. Evans’s Newly Released “B.C.: 60 Minutes from Hell” is a Stirring Memoir of a Former Addict and His Ultimate Victory Through Christ

“B.C.: 60 Minutes from Hell” from Christian Faith Publishing authors Kenneth C. Walker and Susan L. Evans is, on one hand, a rousing commentary on addiction and temptation and its power to utterly derail a life, and on the other, a heartbreaking memoir of the authors’ own life stories dealing with addiction or watching a loved one succumb to it—ultimately it is a manual for believers to win victory over substance abuse with God’s help. 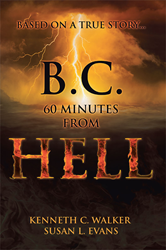 “B.C.: 60 Minutes from Hell”: a book about overcoming addiction and temptations through faith. “B.C.: 60 Minutes from Hell” is the creation of published authors Kenneth C. Walker, founder of 153rd God Squad Ministries that does rehab missionary work in his hometown Ft. Lauderdale, Florida; and Susan L. Evans, a longtime friend of Kenneth’s who holds a Bachelor’s Degree in Social Work and has a love for writing and for seeing recovering addicts succeed in life.

Walker shares, “I remember when it all started, my addiction, that is. I am living in the land called Fort Liquordale, Florida, which is flowing with Budweiser on tap and honeys in their teeny weenie bikinis tanning in the sun. It was back in 1971. Our little league baseball team was playing in a county tournament. Many teams from different cities would come and compete. In the game we were playing in, it was the bottom of the sixth inning and we were leading by two runs! Then, while I was on the pitcher’s mound, a parent of one of my teammates yelled to me from the bleachers. He promised if we won the game that he would give me a twelve pack of beer. At twelve, that was all the incentive I needed! I struck out the next three batters, and we won the game. After the game, I approached him to make sure he was going to stand behind what he had promised. He assured me that he would.”

Published by Christian Faith Publishing, Kenneth C. Walker and Susan L. Evans’s new book serves as a courageous and compassionate testimony for God’s power to save people from the temptations of darkness that surround them even from an early age.

The memoir aspect of the book speaks of a B.C. or “before Christ” scenario of living in the grips of substance abuse, “sixty minutes away from hell”. The life-saving redemption aspect aims to guide the reader to a life after they have received Him.

Consumers can purchase “B.C.: 60 Minutes from Hell” at traditional brick & mortar bookstores, or online at Amazon.com, Apple iTunes store, or Barnes and Noble.

For additional information or inquiries about “B.C.: 60 Minutes from Hell”, contact the Christian Faith Publishing media department at 866-554-0919.