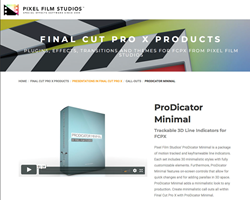 ProDicator Minimal is a package of minimalistic motion tracking and keyframeable tracking line indicators created for ease and flexibility. Each set’s presets include a left and right aligned design for added versatility. Each preset features customizable prong lengths, colors, targets, and text. Most of all, ProDicator Minimal comes with a variety of minimalistic designs that results in giving any production a simple and clean professional look.

Final Cut Pro X users can add an extra dimension to production with easy to use on-screen controls. These controls will determine the scale, position, and either Y or Z rotation of title elements with the drag of a mouse. In addition to on-screen controls, all other published controls can be found in the inspector window on the right-hand side of the viewer. Because of these controls, creating a parallax effect in 3D space becomes a breeze.

Included in the package are two sets of presets for footage flexibility and effectiveness. First off will be the motion tracked presets that makes tracking easy with built in auto motion tracker. Secondly, for harder to track scenarios, are the simple to use keyframable presets. In addition, each keyframed preset includes a helpful built in magnification tool. Most noteworthy is the on and off toggle and easily adjustable zoom amount slider control.