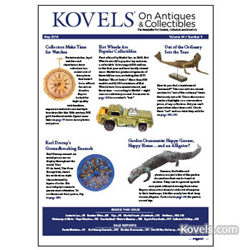 Kovels On Antiques & Collectibles May 2018 newsletter

Pocket and pendant watches drew collectors to a recent sale of timepieces that hadn’t been offered for sale in decades and they are featured in a sale report in Kovels On Antiques & Collectibles May 2018 newsletter. See the 18-karat gold Patek Phillipe triple date moon phase repeater watch that took top lot. Running and chiming correctly, it auctioned for over $30,000. Chatelaines, decorative belt-style hooks that held everyday household tools like scissors, watches, thimbles and keys for mid-19th-century women, were also in the sale. English and French examples are pictured with prices.

Karl Drerup is known for his “painterly” approach to mid-20th-century enameling. His plaques, panels, bowl, plates and other works can be found in many museums. Sixteen of his pieces were included in a recent auction in New Jersey and some went for as high as $2,500. Examples can be found in Kovels’ May issue.

An auction in England recently held an “Out of the Ordinary” sale, promising “things . . . that make people stop and stare.” Kovels’ May 2018 newsletter pictures examples of their unique merchandise, like the wooden architectural jewelry box that brought more than $8,000, as well as a mounted and encased taxidermied goldfish and a set of Victorian-era lawn shoes for a pony that each sold for $277. And gnomes, birdbaths and planters are just a few of the garden decorations that can be found for great prices at auction. Kovels pulled together an eclectic assortment of garden ornaments from the classical to the whimsical, and they’re pictured with prices in the May newsletter.