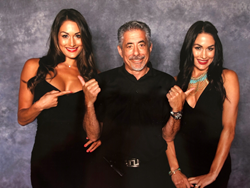 Fandemic Tour, a new type of comic con, will bring their new tour to Sacramento this June. Fandemic Tour is produced by the former CEO of Wizard World, John Macaluso, who managed amazing shows in 2014 and 2015 and now is bringing that experience to Sacramento and Houston in 2018.

Fandemic Tour will feature celebrities including: Norman Reedus (The Walking Dead, The Boondock Saints), Jeffrey Dean Morgan (The Walking Dead, Magic City), Michael Rooker (Guardians of the Galaxy, The Walking Dead, Tombstone, Cliffhanger, Days of Thunder), Chandler Riggs (The Walking Dead), Steven Yuen (The Walking Dead), .Sean Gunn (Guardians of the Galaxy, Gilmore Girls), Chris Sullivan, native of Sacramento, ("This is Us", "Guardians of the Galaxy"), Milo Ventimiglia (This is Us, Heroes, Gilmore Girls), Chris Sullivan (This is Us, Guardians of the Galaxy), Tom Welling (Smallville, Lucifer), John Schneider (Smallville, The Dukes of Hazzard), Sean Patrick Flanery (The Boondock Saints, Powder, Young Indiana Jones), Jason David Frank (Mighty Morphin Power Rangers), Robert Englund (A Nightmare on Elm Street, Freddy vs. Jason), Christian Kane (The Librarians, Leverage), James Marsters (Buffy the Vampire Slayer, Angel), Bruce Campbell ("Ash vs. Evil Dead"), Robert England ("Nightmare on Elm Street"), David Della Rocca ("Boondock Saints") and Clare Kramer (Buffy the Vampire Slayer, Bring it On). Fandemic Tour is a brand new experiential convention weekend that will bring together celebrities, well-known and emerging comic artists, cosplayers of all shapes and sizes, and exhibitors with merchandise designed to offer something for every type of pop culture fan. All confirmed talent will make appearances on at least two days of the weekend, and many will appear on all three days. All guest appearance dates are listed at http://www.FandemicTour.com.

Fandemic Tour will offer attendees the opportunity to purchase autographs and photo opportunities with their favorite celebrity talent and artists. Photos come in the form of 8x10” printouts.

Fandemic Tour will continue to announce additional big-name guests in the coming weeks leading up to its inaugural event, June 22-24th at the Sacramento Convention Center in Sacramento, Calif.

General Admission tickets are available at the following price points:

Tickets, celebrity packages and Photo Ops are available now at http://www.FandemicTour.com for each day of the weekend.

ABOUT FANDEMIC TOUR
Fandemic Tour is a three-day extravaganza of all things Geek! Fandemic will gather pop culture celebrities, well known and emerging comic artists, professional and amateur
cosplayers, and exhibitors that sell socks, t-shirts, hats, and everything in-between. In
addition, Fandemic Tour will provide programming open to all who attend throughout the weekend. Throughout the weekend, attendees have the opportunity to purchase autographs and photo ops with Fandemic Tour guests. Photo opportunities come in the form of a photo of you and the celebrity guest taken on a professional camera under ideal lighting conditions. Photos are printed on 8×10” paper on dye-sublimation photo printers. Most guests are available for at least two of the three days of the event, and all appearance dates are spelled out on the Fandemic Tour website, http://www.FandemicTour.com.