Michelli Family Ties Book 1, what happens when you realize that the fresh start you sought is way more than you bargained for? 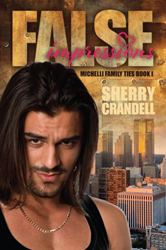 When your heart is broken and all your plans shattered, you might make some really impulsive decision. This includes running off to a faraway place, hoping to get a fresh start and leave your problems behind.

However, what happens when you realize that the fresh start you sought is way more than you bargained for?

“Tabitha finds herself on an unexpected path that leads her to an unusual family,” Sherry Crandell says. “When she finds herself unwillingly falling for Dominic, will it lead to shattered false impressions and realization that God has led her to the exact place she belongs?”

The Christian novel is filled with mystery, temptation, and unexpected endings with love that shatters false impressions. Set in modern day Texas, this opposites attract novel featurs unexpected circumstances that surround TJ and her group of friends.

The novel focuses on a love story at the end featuring Jesus’ redemptive plan. The story instills the great love God has for all those who are lonely, tired and looking to belong.

False Impressions is the first book in "Michelli Family Ties" series. Sherry Crandell's Destiny by Design, the second book in the series won Grand Prize in the Christian Author Awards in 2015 and was an Award Finalist in the 2017 Readers' Favorite Book Awards: Christian-Romance-Contemporary category.

Xulon Press, a division of Salem Media Group, is the world’s largest Christian self-publisher, with more than 12,000 titles published to date. Retailers may order False Impressions through Ingram Book Company and/or Spring Arbor Book Distributors. The book is available online through xulonpress.com/bookstore, amazon.com, and barnesandnoble.com.