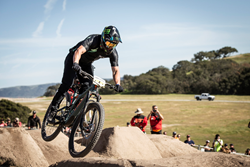 I am really excited to take both the Enduro and Downhill wins here at Sea Otter. It really helps light a fire going into the next round of the Enduro World Series in a couple of weeks in France. Hopefully I can ride the confidence to another win - Jared Graves

Graves took home gold in both the Enduro and Downhill events, while teammate Ropelato took the win in the always-entertaining Dual Slalom.

The Sea Otter Classic is the worlds premiere cycling festival, with 14 professional races across all disciplines and over 500 exhibitors. Taking place at the Laguna Seca raceway, this year competitors enjoyed sunny skies and cool temperatures at the largest cycling event in America.

Graves swept all stages in Enduro, taking home the title in convincing fashion with a total race time of 9:43.528, almost 14 seconds ahead of his closest rival. The Australian legend also took on all comers in the Downhill Event, wining by almost two seconds in the sub two-minute event. Graves has won the Sea Otter downhill more times than any other athlete.

“I am really excited to take both the Enduro and Downhill wins here at Sea Otter,” said Graves. It really helps light a fire going into the next round of the Enduro World Series in a couple of weeks in France. Hopefully I can ride the confidence to another win."

Ropelato took on all comers and defended his title from 2017 as he sprinted through heat after heat in the head to head race format on Saturday evening amidst a party atmosphere with a large, raucous crowd in attendance. It was a tight fought battle right through to the finals, but the jack of all trades once again proved that it doesn’t matter the discipline, he will always be a podium threat. Graves took home the bronze.

The American was stoked on the win. “Yeah, it was way cool to go back to back,” said Ropelato. It was hard though, a lot of pressure from other guys. Everyone seemed to be going real fast toward the end of the night. They had me sweating! The track was fun. It was definitely a little more technical and slicker than in past years."

Both Ropelato and Graves now prepare to return to Europe to race the next round of the Enduro World Series event on May 12-13 in Olargues – Montagnes du Caroux, France.