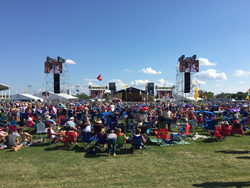 “It’s an honor for Yamaha to support this festival...the participation of our local dealer, Ray Fransen’s Drum Center, has been crucial to our success,” said Dave Jewell, marketing communications manager, Yamaha Corporation of America.

The New Orleans Jazz & Heritage Festival (NOJHF) has been a mainstay of the Louisiana cultural scene since its start in 1970, and Yamaha Corporation of America (YCA) has been the official drum sponsor of NOJHF for over 33 years. From April 27 to May 6, hundreds of thousands are expected to attend events and concert performances at 12 venues on the Fair Grounds and Race Course, just minutes from the historic French Quarter. The company’s new Tour Custom Maple series is making its festival debut, and sets from the entire Yamaha line of drums will be set up on each of the 11 other stages.

“The festival is always a ‘trial by fire’ for any drum set, but it is a special chance for the Tour Custom to show its great sound and exceptional quality. This set was built to withstand the rigors of a long-term musical event and emerge ready for the next one,” said David Jewell, marketing communications manager, Yamaha Corporation of America.

The Tour Custom Maple series, the newest of the Yamaha drum lines, was introduced this year as the drum set for the active, working drummer, both on tour and in the studio. Musicians at the festival are also playing on the Recording Custom, Live Custom, Absolute Hybrid Maple, Stage Custom Birch and Rydeen drum sets.

“It’s an honor for Yamaha to support this festival, but the participation of our local dealer, Ray Fransen’s Drum Center, has been crucial to our success,” added Jewell. “From supplying the drums to making the rounds with our staff every morning to prepare them, their support is invaluable. When there are partners like Ray and his team who have a passion for music, everybody benefits.”

Ray Fransen, owner of Ray Fransen’s Drum Center, echoed the sentiment, saying, “With the rapid and unpredictable changes our store has experienced over the years, one consistently bright and glowing spot has been our partnership with Yamaha Drums in supplying the New Orleans Jazz & Heritage Festival for 30-plus years. The quality of the equipment goes without saying, but it is the extra effort on the part of the Yamaha staff that makes it so special. Rarely do we see corporate folks come down and get their hands dirty in helping to tech the drums while seeming to enjoy every minute. The post-festival sale we have is consistently successful also. Hats off to Yamaha!”

The New Orleans Jazz & Heritage Festival and Foundation, Inc. is the nonprofit organization that owns and presents this annual festival. Proceeds are channeled into year-round programs to support the music and culture of New Orleans and Louisiana.

To find out more about the New Orleans Jazz & Heritage Festival, visit http://www.nojazzfest.com
Additional information about Yamaha Corporation of America is available at http://4wrd.it/YAMAHAUSA