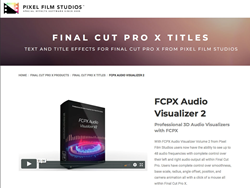 "Experience captivating 3D visualizer effects with this next installment in the Audio Visualizer line for FCPX!"

With FCPX Audio Visualizer Volume 2 from Pixel Film Studios users now have the ability to see up to 48 audio frequencies with complete control over left and right audio output all within Final Cut Pro. Users have complete control over smoothness, base scale, radius, angle offset, position, and camera animation.

Each preset in FCPX Audio Visualizer Volume 2 has up to 48 individual frequencies per channel simulating a wide range of audio visualization. With easy to use drag and drop presets users can now visually see audio in effect. Users have full range of control over audio smoothness and base scale with easy to use sliders all with a click of a mouse.

With FCPX Audio Visualizer Volume 2 preset pack users have the ability to stack multiple presets and create customized visualizers each time. Users can select from an arrangement of templates ranging from circles, lines, rectangles, single shapes, a even an animatable drop zone. Users then have complete control over spread, color, position, rotation, angle, angle offset, and much more all within Final Cut Pro.