That’s No Moon, It’s a Star Wars Gift: Fifth Sun Celebrates May the Fourth in Style

Fifthsun.com offers a Star Wars gift, with purchase, in honor of this year’s May the Fourth holiday. 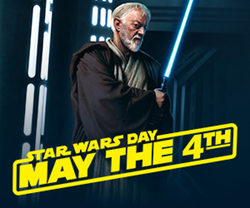 My favorite memory was wearing Star Wars tees on May the 4th.

Once a year, Star Wars fans celebrate the galaxy far, far away with the much-loved holiday, May the Fourth. Whether fans feel a kinship with the Dark Side or the Jedi Masters, everyone can agree that May the Fourth is a perfect way to celebrate the Star Wars franchise. The popular pun “May the Fourth” – originally created by fans – has gained an official following with the observance of Star Wars Day, a once-a-year celebration for all the scruffy-looking nerf herders out there.

As an official partner with Star Wars, Fifth Sun prides itself on offering fans the best Star Wars shirts, hoodies, tanks, and more for the whole family. All Star Wars fans – both of the original trilogy and new favorites like Solo: A Star Wars Story – will find the perfect tee from the diverse offerings of styles for men, women, and kids on Fifth Sun.

Fifth Sun’s Graphic Designer, Kirsten Barsotti, loves Star Wars. She admits, “my favorite memory was wearing Star Wars tees on May the 4th” to celebrate Star Wars Day with her co-workers and fellow Star Wars fans. Join Fifth Sun this Star Wars Day by getting the best Star Wars tee in the galaxy.

It’s important to find a balance in your wardrobe, so be sure to get a few designs from the Dark Side, as well as, a few from the Light Side. Whether you’re a Princess Leia admirer or a Luke Skywalker wannabe, Fifth Sun has something for everyone. Rebels and members of the Empire may not have a lot in common, but they can all appreciate the galactic Star Wars designs being offered to the Fifth Sun community this holiday.

Feel the force of these awesome Fifth Sun Star Wars designs this May the Fourth.

The Star Wars franchise came to a movie theater far, far away in 1977 and the world has never been the same. The beloved space odyssey that started with films like A New Hope (1977), The Empire Strikes Back (1980), and Return of the Jedi (1983) has opened the door for continued sagas like The Force Awakens, and Solo: A Star Wars Story. The age-old struggle between good and evil has taken on galactic proportions in Star Wars and it continues to awe and inspire fans every day.