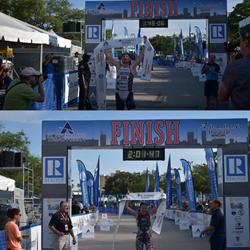 “I was going for that seventh win,” said Haskins.

Eric Lagerstrom and Sarah Haskins claimed victories at the 35th annual St. Anthony’s Triathlon. World Champions, Olympians, and professional athletes from across the world comprised the field for this year’s race, making it one of the most competitive races in event history.

With near perfect temperatures and no wind, athletes battled each other over the Olympic triathlon distance (1.5K swim, 40K bike and 10K run). As a USAT Regional Championship site, registered USAT athletes qualified for the 2018 Olympic-Distance National Championships in Cleveland, Ohio, August 11-12, from the 2018 St. Anthony’s Triathlon.

For the women, Sarah Haskins crossed the tape in 1:58:48 to secure her seventh victory. To round out the podium, Alicia Kaye finished in second place, and Lauren Goss finished in third.

“I was going for that seventh win,” said Haskins, “That was the goal. I will have to come back next year to achieve the record eight wins.” Haskins felt strong throughout the bike and swim, but did not feel her best during the run. Haskins was able to rally and maintain position ahead of competitor, and another past St. Anthony’s Triathlon champion, Alicia Kaye. “These are the most ideal conditions we have ever had here,” said Kaye.

In the men’s field, Erin Lagerstrom took the top podium spot with a new St. Anthony’s Triathlon record of 1:45.02, a 49-second course record. Lagerstrom was followed by Jason West in second, and Cameron Dye in third.

Dye was first out of the water with Lagerstrom close behind. Lagerstrom did not have his second wetsuit on during the swim due to a shipping arrival issue, and in turn, was able to make a quick transition to the bike. While on the bike, Lagerstrom rode hard, attacking each of the 55 corners on the course.

“Honestly, I was really worried about not having my second layer wetsuit,” said Lagerstrom. “I did not want to get out of bed this morning. I kept refreshing that tracking number.” The quick transition and attention to the bike paid off for Lagerstrom with competitor Cam Dye agreeing, “He [Lagerstrom] killed it. It was an awesome race.”

“This 35th running of the St. Anthony’s Triathlon events were more successful than ever before,” said Susan Daniels, race director for St. Anthony’s Triathlon. “A new course record was established, we hosted a USAT National Qualifier, and had the pleasure of having some of the world’s best triathletes compete on our St. Petersburg course.”

Next year’s St. Anthony’s Triathlon will take place from April 27 to April 28, 2019. Registration for the 2019 event will open in October.

About BayCare Health System
BayCare is a leading not-for-profit health care system that connects individuals and families to a wide range of services at 14 hospitals and hundreds of other convenient locations throughout the Tampa Bay and central Florida regions. Inpatient and outpatient services include acute care, primary care, imaging, laboratory, behavioral health, home care, and wellness. Our mission is to improve the health of all we serve through community-owned, health care services that set the standard for high-quality, compassionate care.