For the First Time in 9 Years at Sky Harbor Airport, a New Taxi Company Starts Operations May 1st

After serving the Metro Phoenix and Tucson community for 11 years, VIP Taxi launches with a new fleet at Sky Harbor airport, the first time a new taxi company has operated at Sky Harbor since 2009. Read about the new technology VIP Taxi is bringing to America's friendliest airport. 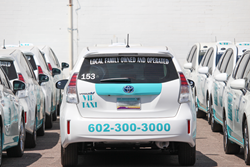 When it’s a family business, everyone is all in, and everyone’s here to help, there are times that we are outside as owners washing cars, helping drivers with their tablets, cooking and chatting on driver appreciation days

What started as a dream has turned into a locally grown success story and has turned VIP Taxi into one of the most recognizable vehicles around metro Phoenix. After operating as a family owned business in Arizona for 11 years, VIP Taxi opens a new chapter in their company history by launching 24/7 at each terminal at Sky Harbor Airport this May 1st.

With the expected launch, VIP Taxi plans to bring never before seen technology and safety to Sky Harbor Airport. “Safety is incredibly important to VIP Taxi,” shared one of the owners Jason Gauer, son of founder Dave Gauer. “We have remotely-enabled exterior and interior cameras with night vision, audio and video streaming, GPS, speed reporting, and inertia monitoring to detect sudden motion, such as a hard stop or rapid acceleration. If a vehicle experiences an incident, we are able to connect to the camera live to evaluate the incident and react from an informed position.”

Trying to be safer was what brought owner Dave Gauer to initially enter the taxi industry. “40 years ago I traded a motorcycle for my first taxi cab,” shared Dave. “It was a motorcycle that was far too fast for me to ride and I thought getting into the cab business would be a safer idea.” While he didn’t know it at the time, but years later, driver and passenger safety would end up being one of the leading goals of his future transportation company in the desert.

VIP Taxi has overcome a lot to reach this point, in today’s business climate where private equity, venture capitalists, mergers and disrupting technology are the norm, the family owned business can help a company be more in tune with what the community in Arizona needs and a changing landscape. “When it’s a family business, everyone is all in, and everyone’s here to help, there are times that we are outside as owners washing cars, helping drivers with their tablets, cooking and chatting on driver appreciation days, and we have an open-door policy between drivers and ourselves because we’re all a team,” shared Jason when asked what a typical day is like.

During a recent warm April afternoon, it’s all hands on deck as Dave, Jason and other son Brandon were seen running around their Central Phoenix lot preparing the fleet of the dozens of new vehicles for the airport. “I think that being local, family owned has helped us because we as a family me, my dad, my brother are able to communicate about anything, any topic that we have in the industry, in the business, we dig into things as we read and discuss our customer’s feedback with the perspective of always improving,” reflected Jason.

While there has been much preparation to get the fleet of brand new cars ready, the people aspect of VIP Taxi has not been lost of the Gauer family. “The drivers make VIP Taxi. It’s just been phenomenal to watch and I’ve seen that myself, where I happen to be stopped at an intersection and I looked across and I actually see a VIP driver helping with someone’s groceries at a grocery store.” Starting May 1st, Arizona and the 40 million passengers who pass though Sky Harbor Airport will have a chance to experience for themselves just how a different a ride from a family owned transportation company can be.

About VIP Taxi:
VIP Taxi is a local, family owned business serving Metro Phoenix and Tucson since 2007. VIP Taxi uses a modern fleet and transportation technology including smart tablets, courteous and professional drivers, and the best touch-screen smartphone/credit/debit payment terminals that you’re already used to using at major retailers. As of May 1st, VIP Taxi is offering 24/7 service at Sky Harbor Airport. To learn more visit VIPtaxi.com or call or text (602) 300-3000.

A new VIP Taxi at Papago Park, a few miles away from the VIP Taxi office in Central Phoenix

VIP Taxi in Downtown Phoenix after dropping off passengers.