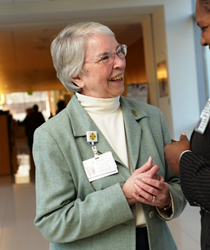 “Sister Amos has dedicated her life to the service of others, fighting homelessness and improving the quality of care for our community at large," said Kevin Spargo, president-elect of CBNB.

“The Catholic Business Network of Baltimore is privileged to partner with the Archdiocese of Baltimore to recognize individuals who exemplify the guidance of their spiritual faith throughout their professional lives,” said Kevin Spargo, president-elect of CBNB. “Sister Amos has dedicated her life to the service of others, fighting homelessness and improving the quality of care for our community at large. She is an inspiring example of Catholic leadership and we are honored to present her with the sixth-annual Catholic Business Leadership Award.”

The 2018 award will be presented to Sister Helen at CBNB’s Business Leadership Breakfast to be held on Friday, July 27, 2018, beginning at 7.30 a.m. at the Embassy Suites in Hunt Valley, MD.

Sister Helen has more than 30 years’ experience in the fields of education and health care administration. After working as a teacher in Georgia, Sister Helen arrived in Baltimore to take a position as Registrar for Mount Saint Agnes College where she had earned her Bachelor of Arts degree in Mathematics in 1962. Sister would later take on administrator duties with the Sisters of Mercy of the Union and the Archdiocese of Baltimore. Before coming to Mercy, Sister Helen served as President of the Sisters of Mercy of the Union in Silver Spring, Maryland from 1984 to 1991.

Sister Helen and the leadership team of Mercy Health Services are responsible for the development and implementation of numerous programs at Mercy, including the creation of The Center for Women’s Health & Medicine and its flagship programs in gynecologic oncology and breast cancer diagnosis and treatment; “The Woman’s Doctor” program on WBAL-TV; and Mercy’s network of specialty and primary care physicians. Sister Helen is dedicated to improving the quality of life of women and the community as a whole.

Sister Helen serves on the board and is President of Mercy Ridge, a continuing care retirement community in Timonium, Maryland. She is currently a member of the Board of Trustees of St. Joseph’s/Candler Health System in Savannah, Georgia; Mercy Health Ministry, St. Louis, Missouri; the Downtown Partnership (past chair) and the Downtown Management District Authority of Baltimore City; Cristo Rey Jesuit High School; and the Board of Financial Administration of the Archdiocese of Baltimore. Sister Helen is a former member of the Board of Directors for the Greater Baltimore Committee and the United Way of Central Maryland. She is the immediate past chair of the Leadership Advisory Group for Baltimore City’s 10 Year Plan to End Homelessness.

Sister Helen earned her Master of Science degree in Mathematics from the University of Notre Dame and received Honorary Doctor of Humane Letters degrees from College Misericordia in Dallas, Pennsylvania, and from Notre Dame of Maryland University.

Founded by the Sisters of Mercy in 1874 in Baltimore, MD, Mercy Medical Center is a university-affiliated medical facility with a national reputation for excellence in women’s health. For more information, visit Mercy at http://www.mdmercy.com; MDMercyMedia on FACEBOOK and TWITTER; or call 1-800-M.D.-Mercy.
-30-