Director of the Israel Center for Disaster Medicine and Humanitarian Response at Sheba Medical Center, Tel Hashomer, Professor Elhanan Bar-On presented at the Jerusalem Post’s 7th Annual Conference in New York City on April 29, speaking about the emergency response and humanitarian work he and his team perform around the globe. 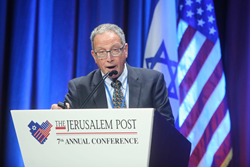 Prof. Elhanan Bar-On speaks to a captivated crowd of 1,500 at the 2018 Jerusalem Post Conference.

We know no borders or limits in our humanitarian care, which is a crucial part of what we do at Sheba Medical Center.

Professor Elhanan Bar-On, a renowned pediatric orthopedic surgeon and the first director of the Israel Center for Disaster Medicine and Humanitarian Response at Sheba Medical Center, Tel Hashomer, spoke on April 29 in New York City before 1,500 attendees of the 2018 Annual Jerusalem Post Conference.

Through the Center, teams from Sheba Medical Center travel far and wide to provide medical care both during emergencies and in routine times. Being situated within a large hospital such as Sheba enables rapid mobilization of personnel and resources in order to be among the first teams to arrive at the scene of disasters in times of need. The Center also plays a vital role in training medical teams from around the globe who visit Sheba to learn best practices and receive instruction from some of the world’s top experts. In addition, the Israel Center for Disaster Medicine and Humanitarian Response at Sheba Medical Center, Tel Hashomer, is leading the way when it comes to cutting-edge research aimed at improving the level of treatment for victims.

In his presentation at the conference, Prof. Bar-On shared highlights from some of his most recent humanitarian missions. He spoke about teams helping earthquake victims in Haiti, responding to a cholera outbreak in Zambia and restoring vision to the blind through life-changing cataract surgeries in Papua, New Guinea.

Demonstrating Sheba’s unparalleled commitment to the health and full recovery of all of its patients, Prof. Bar-On told the moving story of how he followed a woman rescued from beneath the rubble in Haiti and treated at the IDF field hospital, returning later to be at her side when she took her first steps on a new prosthetic leg.

Sheba Medical Center is the largest and most comprehensive center in the Middle East, and humanitarian aid has been a core part of its mission since its founding in 1948.

“We know no borders or limits in our humanitarian care, which is a crucial part of what we do at Sheba Medical Center,” said Prof. Yitshak Kreiss, Sheba Medical Center’s Director General and the former Israel Defense Forces Surgeon General. “We are thrilled that Prof. Elhanan Bar-On was able to share this core part of our mission with the Jerusalem Post Conference.”

Prof. Bar-On, a Lt. Colonel in the Israel Defense Forces Medical Corps Reserve, is ideally suited to respond to natural disasters and mass casualty incidents. He is specially trained in cutting-edge emergency medicine and mobilizing resources on foreign lands. Prof. Bar-On has provided training in emergency disaster response around the globe, including in Mozambique, Tanzania, China, Kosovo and Albania, and also currently serves on a World Health Organization task force that has a mission to set the highest standards for disaster care.

Prof. Bar-On shared how he and his Sheba Medical Center team give hope to victims who often feel abandoned by the rest of the world, receiving a resounding ovation from conference attendees.

About Sheba Medical Center
Born together with Israel in 1948, Sheba Medical Center, Tel Hashomer is the largest and most comprehensive medical center in the Middle East. Sheba is the only medical center in Israel that combines an acute care hospital and a rehabilitation hospital on one campus, and it is at the forefront of medical treatments, patient care, research and education. As a university teaching hospital affiliated with the Sackler School of Medicine at Tel-Aviv University, it welcomes people from all over the world indiscriminately.