More than eleven years after the original “150 Illinois Great Places” were named by the Illinois Council of The American Institute of Architects (AIA Illinois), Illinois architects have added more Great Places to the list in honor of the State’s 200th birthday. 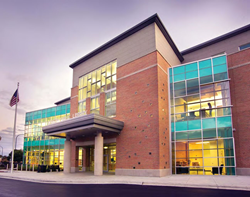 Addison Public Library is one of AIA Illinois' 200 Great Places.

“Illinois holds a unique place in the history of American architecture and our people lead with a strong tradition of design innovation that is recognized worldwide,” said Governor Bruce Rauner.

Each of the 200 Great Places are accessible to the public, holds significance for local communities and creates a unique experience for visitors.

All of the 200 Great Places are featured in a new website at http://illinoisgreatplaces.com. AIA Illinois also created a new Instagram account to feature the Great Places at https://www.instagram.com/ilgreatplaces/.

“Illinois’ Bicentennial in 2018 was the perfect opportunity to take a stronger look at more contemporary architecture than we were able to do with the first 150, which went all the way back to the beginning of Illinois civilization,” said Kim Kurtenbach, AIA, architect with BLDD Architects and 2018 AIA Illinois Board President. “As before, it was difficult to narrow the list to only 200. Separately and in total, our 200 Great Places are more than just examples of good or even great design – they are a testament to humanity’s need to shape their environment in a way that is often both vibrant and equitable.”

The Aqua Tower’s design has been described as “lyrical gracefulness,” while it broke a ceiling of sorts with the distinction as tallest building to date designed by a female architect; The Method Factory turns 21st century manufacturing on its head with its total immersion in eco-friendly design.

Downstate gets its contemporary spotlight too, including gems like the Champaign Public Library designed by Ross Barney Architects and built in 2008; and the Doudna Fine Arts Center in Charleston designed by Antoine Predock as a "crystalline formation that...is a new arrival point and gateway that both unifies the arts and reaches out to the community.”

“Illinois holds a unique place in the history of American architecture and our people lead with a strong tradition of design innovation that is recognized worldwide,” said Governor Bruce Rauner. “The AIA list recognizes Great Places all around our state and tells the collective story of great imagination, sheer will, and skill.”

The Illinois Great Places recognition program was created in 2007 to commemorate AIA’s 150th anniversary and was designed to broadly include the “built environment,” which includes landscape and engineering places, as well as architecture. A majority of the original list--including schools, churches, offices, court houses, museums, and planned communities--were historically designated places, with many others having been built in the late 20th century. Many of the newest additions represent 21st century development.

"Illinois architecture is a significant part of the history of innovation in our state which includes the first skyscrapers in the nation," Stuart Layne, Executive Director of the Governor's Bicentennial Office commented. "We salute the American Institute of Architects Illinois for their work on this Bicentennial project."

Nominations came from AIA members from all parts of the state and were selected by each of the state’s AIA chapters by region. Nominations were weighed against criteria including the AIA’s “10 Principles of Livable Communities:” they must be publicly accessible, pedestrian-friendly, designed on a human scale, and provide vibrant, public spaces, among meeting other requirements.

ABOUT AIA Illinois
AIA Illinois is empowered by its 4,000 architect and architectural intern members to champion the profession of architecture.

ABOUT THE ILLINOIS BICENTENNIAL
On Dec. 3, 1818, Illinois became the 21st state in the union. The Illinois Bicentennial is a yearlong celebration of what has been BORN, BUILT & GROWN in the state and a reminder of why we are #IllinoisProud.

Citizens are encouraged to participate in the celebration by visiting http://www.illinois200.com and using the hashtag #IllinoisProud. Partners and event and project managers planning activities between Dec. 3, 2017, and Dec. 3, 2018, can apply for endorsement to become an official part of Illinois Bicentennial by visiting the PARTICIPATE page at http://www.illinois200.com.

Illinois Bicentennial of Statehood 1818-2018The State of Illinois is celebrating its 200th birthday this year.