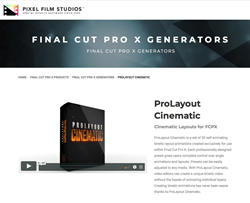 ProLayout Cinematic is the ultimate package for templates in Final Cut Pro X. ProLayout Cinematic is used to display friends and family, scenery, products and much more. In addition, customize the color of scene elements, background, and the style of the text using controls in Final Cut Pro X. Instantly change the vibe of your production using basic templates that can be edited with incredible ease.

Each layout in ProLayout Cinematic includes an Environment Control section with its own set of controls. All of the 30 included templates includes reflections that users can alter by adjusting a few simple controls. Finally, every template includes unique elements like smoke, frame color, and backgrounds that can be altered by tweaking a few easy controls. Develop an impressive and unique scene within seconds.

All ProLayout Cinematic presets contain numerous layers of text that can be fully adjusted within Final Cut Pro X. As a result, editors can change the positional orientation and rotational angles of each text layer to create parallax effects. In addition, change the font type, style, color, size by simply double clicking on the text in the Viewer window to access Final Cut Pro’s Title Tab in the top-right section of the workspace.