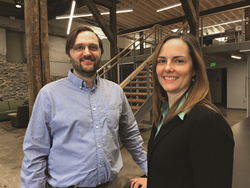 "We want to honor Michael’s legacy by continuing our commitment to the work and to the community.” - John & Kori Matheis, Owners

Landon Proffitt founded the firm in 1973 when Frederick was relatively small with a population of less than 24,000–yet on the brink of substantial commercial growth. At the time there was also a growing appreciation for the county’s historic properties and the need for preservation services. Michael Proffitt, Landon’s son, joined the firm several years later and became a partner in 1981. Both father and son oversaw the design of many commercial and government buildings as well as historic renovations.

In 2000, Michael Proffitt hired Ms. Matheis as an architectural designer. Ms. Matheis, a Frederick County native, had recently obtained her Master of Architecture Degree from Savannah College of Art & Design. In 2006, John Matheis, II joined the firm shortly after earning his Bachelor of Science Degree in Architectural Engineering Technology from Fairmont State University. There, John and Kori met and eventually married. In February 2017, Michael Proffitt passed away following complications stemming from a skiing accident, a loss felt throughout the community.

“Michael was an incredible mentor to us. He was adamant about addressing our client’s goals, about being innovative and fostering relationships,” says Ms. Matheis. “While coping with his passing, we reached out to our clients to address concerns about the future of the firm and how they would continue to be served.”

The Matheises weighed the options for the firm’s future and ultimately decided to acquire it. “We understand the local climate and context. The employees who staff the office have been here for years. We don’t anticipate any significant change in philosophy or operations. We want to honor Michael’s legacy by continuing our commitment to the work and to the community.”

Current projects include the design of a new building for FCPS’s Rock Creek School in Walkersville, an expansion to the City of Rockville’s Swim and Fitness Center, two additions at St. John’s Catholic Prep, and the replacement of the slate roof at Frederick City Hall. Mr. Matheis says the firm has also been involved in the design of medical offices including facilities for FMH and other private practices on TJ Drive–noting the increase in medical services in Frederick.