Bita Daryabari enters an elite short list of women of Iranian heritage to be bestowed with an honorary doctorate in the U.S. 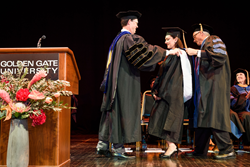 Build your own network of humans to love, respect and share with—their strength is your strength, and their success and happiness will be yours as well.

On Friday, April 27, 2018, award-winning philanthropist and humanitarian Bita Daryabari was the 2018 recipient of an Honorary Doctorate in Human Letters from her alma mater, Golden Gate University (GGU), where she also delivered the commencement address titled, “The Human Network Effect.” The event was held at the Paramount Theater in Oakland, California. Daryabari addressed recipients of graduate degrees in GGU’s business, tax and accounting programs, providing insight and guidance for this milestone in their lives.

“She is an inspirational alumnus, not only for what she has achieved in her career, but also for her rich legacy of giving back and helping others get ahead. Bita is at the forefront of supporting immigrants in the United States, and her leadership in expanding access to US education for students from the Middle East is unparalleled. Her establishment of the Bita Daryabari Graduate Fellowship and the Bita Daryabari Scholarship at GGU are only two of many examples of her generosity and commitment to high learning. GGU is honored to have Bita share her wisdom, optimism and enthusiasm for positive change with our 2018 graduates.”

Daryabari, who has been consistently listed in Gentry magazine’s Top 50 Bay Area Philanthropists, discussed her theory of “The Human Network Effect” as being more important than the Silicon Valley’s known “Network Effect”— the force behind the seeming invincibility of companies like Google and Facebook.

“Your friends and family; your colleagues and collaborators; the planet and its people—networks that can make you happy, successful and fulfilled. The more we contribute to these networks, the more they give back to us,” said Daryabari in her address. “Remember: of all the people in all your networks, these are the ones you need to look out for most. Because these are the people who have the most power to make you happy.”

She added “Be generous. Respect the dignity of those around you. And, when you hit it big, as many of you surely will, spread the credit, share the wealth. Because this network is the people who have the greatest power to help you succeed professionally–on the terms that you define yourself.”

Daryabari also stressed the importance of helping others in the world. “You can volunteer once a week, teach a child to read, donate to a homeless shelter. But please, give back. Of all the people in your networks, the planet and its people have an extraordinary power to fulfill you.”

She ended with a reference to a Rumi poem about mourning for what one didn’t do in life, “Don’t mourn for what you didn’t do. Reach out, now, to the friends and family who bring you joy. Succeed professionally and share your success. And give back to the planet and people who need your support. Build your own network of humans to love, respect and share with. Their strength is your strength, their success and happiness will be yours as well.”

Daryabari is a graduate of GGU, holding a Masters of Science degree in Telecommunications Management. She was previously honored in 2008 with the Golden Gate University Alumni of the Year Award. She has also endowed the university with the Bita Daryabari Scholarship Program for Women of the Middle East in Business and Law ($1 million).

Daryabari founded and is the executive director of Pars Equality Center, the only non-profit organization providing comprehensive social, legal and community services to the Iranian-American community. Recently, her Center, along with The Iranian American Bar Association and the Public Affairs Alliance of Iranian Americans, filed an amicus (‘friend of the court”) brief with the United States Supreme Court in support of the challenge to the Trump administration’s third travel ban.

She has always held a passion for education and the arts. She created the Bita Daryabari Endowment in Persian Letters at Stanford University ($6.5 million), where The Annual Bita Prize in Literature has become the most coveted prize in the realm of Persian letters. She also gifted a $5 million endowment to the University of California, Berkeley, to further the study of Iranian languages, literature, history, arts and culture.

Other educational endowments by Daryabari, include UC Davis ($1.5 million); the University of Cambridge, England ($2 million), to support continuing research on the Shahnama, or The Book of Kings, the emblematic text of Persian historical culture; and contributions to the UC San Francisco Mission Bay ($1.5 million) for neuroscience research.

About Bita Daryabari
A graduate of Golden Gate University, Bita Daryabari, an award-winning philanthropist and humanitarian, has emerged as one of the most beloved and cherished leaders of the Iranian American community. From the beginning of her professional life, her work has been accompanied by her avid interest in the world of literature, poetry and art. She created the Bita Daryabari Endowment in Persian Letters at Stanford University, where The Annual Bita Prize in Literature has become the most coveted prize in the realm of Persian letters. In 2010, she founded Pars Equality Center where she is also the Executive Director. Her Unique Zan Foundation is dedicated to supporting the education of women abroad—from building orphanages for Afghan children to schools in the Middle East. She was named the World Affairs Council Honoree of the Year in 2015. Other honors include the Ellis Island Medal of Honor (2012); United Nations Appreciation Award for Outstanding Leadership, Commitment and Support of the UN and Achieving the UN Millennium Development Goals (2011); PAAIA Philanthropist of the Year Award (2010); and Golden Gate University’s Alumni of the Year Award (2008). Daryabari’s multi-faceted philanthropy is founded on her simple idea that creativity is the only way to alleviate suffering and ennoble our minds to better comprehend the human condition.