Just Ahead of the Holiday, West’s Leading Supplier of Healthy Animal Fat Shortenings #FatMaps the Tastiest Mexican Stands and Cafes in Los Angeles and Orange Counties 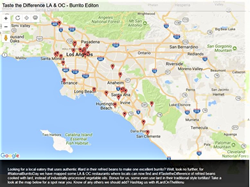 Cinco de Mayo, which marks the surprise defeat of Napoleon III in Mexico in 1862, has become a celebrated foodie holiday -- but it’s no surprise that lard remains a staple of traditional Mexican cooking, especially at those Los Angeles and Orange County establishments showcased on a special Coast Packing Company online gastronomic “taste map,” prepared for the occasion.

In this installment of “Taste the Difference,” Coast Packing -- the leading supplier of animal fat shortenings in the Western U.S. -- is again putting its website (and #FatMap) where its taste buds are.

Coast has #FatMapped restaurants and eateries throughout Los Angeles and Orange counties, spots where locals can taste for themselves just how lard brings out the best in burritos, tacos and refried beans.

Among the can’t-miss places: El Tepeyac Café in Boyle Heights, home of “Manuel’s Special” burrito, weighing in at more than 5 lbs. El Tepeyac has been featured on the Food Network, Travel Channel’s “Man vs. Food,” and more. Also on the map: Gilbert’s El Indio, Yuca’s, Al & Bea’s, Lupe’s #2, Tito’s Tacos and La Indiana Tamales, among roughly two dozen others.

“People don’t go to restaurants so they can consume heavily processed, chemically extracted substitutes for healthy, natural animal fats,” said Ernest Miller, Coast Packing’s Corporate Chef. “We believe in traditional foods, which is one reason why lard is such a mainstay in many Mexican dishes, especially when we celebrate.”

“In terms of freshness, flavor and texture, there really is no comparison, which is exactly why we’re so delighted when consumers can taste for themselves,” said Eric R. Gustafson, Coast Packing CEO. “Toward that end, we at Coast Packing are continuing our efforts to build #FatMaps showing that healthy animal fats are just about everywhere, and that consumers don’t need to go far to find places where they can let their palates make the call.”

Have a favorite restaurant that puts lard or beef tallow on the menu (or just in some of its prize dishes)? If so, drop Coast an email at info@coastpacking.com and the company will put it on the #FatMap. Consumers can also post an image or link to via Twitter/Instagram/Pinterest, etc., with the hashtag #LardOnTheMenu
or #TallowOnTheMenu.

About Coast Packing Company
Now marking its 96th year in business, Coast Packing Company (http://www.coastpacking.com), a closely held corporation, is the number one supplier of animal fat shortenings – particularly lard and beef tallow -- in the Western United States. The company sells to major manufacturers, distributors, retailers, smaller food service operations and leading bakeries. The company participates actively in diverse ethnic markets – from Hispanic retail chains, with its VIVA brand, to various Asian specialty markets. Based in Vernon, Calif., Coast Packing Company is regional, national and, increasingly, global. In some cases, supplier relationships are multigenerational, extending back 50 years and more. Coast is a founding member of the Healthy Fats Coalition (http://www.healthyfatscoalition.org/).