Author Ben Michaels’s Newly Released “Apache Tears” Is the Story of How the Spanish, Apache, and Anglo Fought for Control of the Southwest Territories

“Apache Tears” from Christian Faith Publishing author Ben Michaels is the tale of the war between the Spanish, Apache, and Anglo as they vied for control of the Southwest. Surviving the harsh, but beautiful, desert climate was hard enough, but the people living there also had to overcome each other’s greed in order to preserve their way of life. 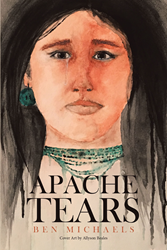 “Apache Tears” is the creation of published author, Ben Michaels. Ben has always had a keen interest in American history, especially the conflicts involving Westward expansion and its consequences on the native peoples. He loves to visit historical sites and view first-hand the places where history was made, particularly in the Southwest region of the country. He is an avid reader of multiple genres and a lover of nature in all its splendid forms. He is most devoted to the simple life he shares at home with his dear wife. They love to garden, watch birds, and enjoy their country life on their beautiful oasis in the desert of their beloved Arizona, which they share with their chickens and desert tortoise, ET. For more information about Ben Michaels’s connection to the Tubac Valley, please visit pima.gov/canoaranch.

“They came seeking gold and the fabled city of Cibola. When they reached the shores of the New World in Old Mexico, they were greeted with open arms by the Aztecs, Mayans and Incas, who considered them gods sent from above. The world they came to conquer knew no famine or disease before they arrived, but these natives soon found these gods were nothing more than mortal men who came to steal their lands and their lives.” --Ben Michaels

Published by Christian Faith Publishing, Ben Michaels’s new book is a story of war and survival.

Geronimo, Cochise, and Eskiminzin are willing to die for their homeland. As Apaches, they will do anything to hold onto their native lands, even with their way of life fading fast in the turmoil of the Western expansion known as Manifest Destiny. At the same time, the Acuñas are caught in the middle as they continue their decades-long fight to save their land grant. Not only must they survive the harsh realities of the fickle desert climate, they must face the marauding bands of renegade Apaches and greedy Americans who covet their land for themselves.

“Apache Tears” is the clash of three cultures. It is a thrilling adventure about the survival of the fittest. The Spanish, Apache, and Anglo will be forced to endure and triumph over the terror of what appears to be an endless war. It is a war fueled by greed and a quest to take what others hold most dear. In the end, some will overcome the odds in the brutal and unforgiving beauty of the American Southwest while others will fall.

For additional information or inquiries about “Apache Tears,” contact the Christian Faith Publishing media department at 866-554-0919.