No One Hungry On Stage... And Off for The Meatball Chronicles 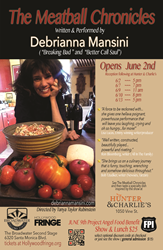 “Actorvist” Debrianna Mansini (Better Call Saul and Breaking Bad) will be in Los Angeles in June to perform the LA Premiere of The Meatball Chronicles as part of the Hollywood Fringe Festival. But the show alone is not enough for Mansini- she will also use the opportunity to advocate for those who need an extra voice. She will be working to raise awareness for New Mexico congresswoman Michelle Lujan Grisham’s Bipartisan Anti-Lunch Shaming bill HR 2401 and Senator Tom Udall’s senate Anti-Lunch Shaming Act, S.1064. Grisham is currently running for Governor of New Mexico, the first state to ban “Lunch Shaming” last year in 2017. California also banned the practice of “Lunch Shaming” as of January 1st, 2018 after public pressure and hard work by Children’s Defense Fund’s Marian Wright Edelman and CA Senator Robert Hertzberg’s SB 250.

Mansini is partnering with Hollywood's Chef Hunter of Hunter and Charlie's Restaurant throughout The Meatball Chronicles LA run to create theme menu selections including Debrianna’s spinach bread, sauce from a recipe passed across generations and of course meatballs. Chef Hunter will host the opening night party as well as a special luncheon on June 9th following the show as a benefit for Project Angel Food. Project Angel Food has provided a vital lifeline of hope and nutrition to our neighbors struggling with illness. They cook and deliver more than 11,000 medically tailored meals every week to people who are too sick to shop and cook for themselves. On June 9th, the team is hosting this kitchen table talk as a benefit luncheon for Project Angel Food, along with local stakeholders and Hollywood Fringe patrons to first raise awareness, while also taking action to demand that Congress end lunch shaming once and for all across the United States. The benefit luncheon will follow the performance at Hunter and Charlie's.

Debrianna Mansini will be working this fall on a new film. She has been seen in both film and television in Hell or High Water, Crazy Heart, Breaking Bad, and Better Call Saul, to name a few. She is also an actor, creator, and co-writer of the web series Cyphers and the upcoming Reaction 21. She is a New York trained actor with a passion for activism. "I believe deeply in using my skills to promote community and consciousness. I am proud to be using my voice and my passion to do some good where I can. Project Angel Food is one of those programs, and their motto Love=Food is exactly what my show is about. It is a perfect collaboration with me and Chef Hunter to spread good in the world.”

The Los Angeles premiere of her original show The Meatball Chronicles June 2nd ( with opening night party following) at The Broadwater Second Stage. As playwright Lisa Konoplisky Sfg I says of The Meatball Chronicles: Theatre should be engaging, challenging, and authentic. Debrianna Mansini’s Meatball Chronicles is all of this and more. She mines both the joyful and soul-crushing extremes of her experience and transforms them, making the personal universal and delivering the necessary catharsis. The result is a an experience of both triumph and transendence—complicated, mature and completely recognizable to all of us who have loved and been loved by family. The laughter and the pain she shares is vulnerable and hilarious. Buckle up, it’s quite a ride! Thank you Debrianna for shining so brightly." Mansini crafts this piece in a way that transcends her own story into universal themes that anyone who has a family can love. As she kneads the dough and thickens the sauce through each Italian recipe, the stories associated with those recipes reveal the complex ways that families cope, laugh, grieve, and show their love through food. Ms. Mansini is thrilled to be connected to the LA Female Playwrights Initiative while at the Fringe Festival.

HOW:
Tickets for the play are $15 and available at: http://www.hollywoodfringe.org/4847

To purchase lunch and the show tickets on June 9th enter the discount code. The show and luncheon tickets are $25. A ticket for the show only is also available for the regular price of $15.
https://2885C7.campgn4.com/MBC-LA