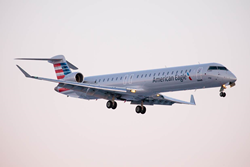 American Airlines announced today that it would take delivery of 15 new Bombardier CRJ900 NextGen aircraft and has selected PSA Airlines to operate those aircraft under the American Eagle brand. PSA will begin to take delivery of the additional 15 CRJ900s beginning in April 2019 with plans for all aircraft to be received by early 2020. American and Bombardier’s executed agreement includes a firm order for 15 CRJ900 plus an additional 15 options.

“This new aircraft placement underscores American’s continued confidence in our PSA team members to provide friendly, reliable and cost-effective regional services for their customers,” said Dion Flannery, President – PSA Airlines. “The CRJ900 NextGen is the right and best aircraft for PSA’s growing fleet and adding these new jets into our system allows us to begin the process of renewal and modernization of our aircraft, providing more opportunities for our airline to grow and serve larger markets on behalf of American.”

Across American Eagle, these new deliveries will be offset by the retirement of smaller single-class regional jets. However, at PSA specifically, we expect modest fleet growth in 2019 as a greater percentage of American’s regional flying will be operated by their wholly-owned carriers.

The CRJ900 NextGen aircraft is a fuel-efficient large regional jet and provides American’s customers with a seamless transition between mainline and regional flights. The 76-seat jet features a two-class configuration with 12 First Class seats, all-leather seating and inflight WiFi, allowing American to offer an unsurpassed regional customer experience in its most competitive markets. The aircraft offers Bombardier’s latest enhancement to the CRJ Series regional jets – the “Atmosphere” cabin, which offers an enhanced passenger experience and can accommodate the largest number of “oversized” roller bags of any aircraft in the same category.

With the new aircraft additions, PSA will operate nearly 70 CRJ900s, or approximately half of the airline’s fleet. PSA is well on its way to operating one of the most modern and efficient fleets in the regional industry.