Belatrix President and Co-founder, Alex Robbio, Named A Stevie Award Winner In The Executive Of The Year Category 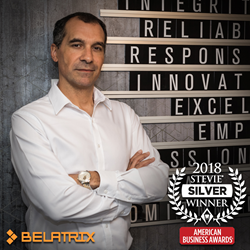 Alex Robbio, CEO and co-founder of Belatrix, was named a Stevie Award winner in the Executive Of The Year category

Belatrix Software, a leading software development company, has won a Silver Stevie Award in the annual American Business Awards for “Company of the Year”. This award was in the computer services category. In addition, Belatrix President and Co-founder, Alex Robbio, was named a Stevie Award winner in the Executive Of The Year category.

The American Business Awards are the U.S.A.’s premier business awards program. All organizations operating in the U.S.A. are eligible to submit nominations – public and private, for-profit and non-profit, large and small. More than 3,700 nominations from organizations of all sizes and in virtually every industry were submitted this year for consideration in a wide range of categories

Nicknamed the Stevies for the Greek word meaning “crowned,” the awards will be presented to winners at a gala ceremony at the Marriott Marquis Hotel in New York on Monday, June 11.

This award follows on from the recognition that Belatrix has received over the past couple of years. From being named a Great Place To Work, to receiving the IDEA Award for institutional excellence, to the founders of Belatrix being recognized as Entrepreneurs of the Year in 2017, Belatrix continues to go from strength to strength.

Alex Robbio, President and Co-founder, commented, “I’m delighted to receive this award, both personally, and on behalf of Belatrix. It reflects the hard work of everyone who is part of the Belatrix family, to create a high-performing workplace which consistently delivers tremendous value for our clients. I’d like to thank the judges of the Stevie Awards for this recognition.

“In 2018, we’re planning to build on this progress. We’re launching new services, such as our customer success management model and strategy, as well as investing in our centers of excellence which focus on areas including DevOps, UX, digital transformation, mobile, test automation, .NET architecture, and blockchain. We’re also planning further geographic expansion.”