Nine teens were recognized with the 2018 Youth Achievement Awards, celebrating the outstanding accomplishments of students with learning disabilities and ADHD, at the Smart Kids with Learning Disabilities annual gala, Make Waves, at the Indian Harbor Yacht Club on April 27, 2018. 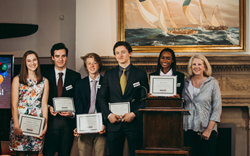 Listen to your heart. Take your difference and run with it.

The award, named for pioneering pediatric neurosurgeon Dr. Fred J. Epstein, recognizes outstanding achievement by young people with learning disabilities (LD) or ADHD. Dr. Epstein credited his significant learning disabilities as a major factor in his success and became an inspiration to children with LD.

The winner of this year’s $1,000 award is Aja Capel from Urbana, IL. Aja is committed to spreading her love of robotics to groups under-represented in the field, particularly girls of color. Only 14, she has received a Youth Service America/Disney Be Inspired Grant, become the youngest winner of the Central Illinois Chapter NCWIT Aspiration Award, and been appointed Chief Curiosity Coordinator by the University of Illinois. Dyslexia, dysgraphia, ADHD, and CAPD will not interfere with her plans for a very busy summer: Aja has been awarded an AspireIT grant to run computer programming camps for girls of color and she has been offered an internship with Caterpillar, Inc.

“Listen to your heart,” Aja advises students with LD and ADHD. “Take your difference and run with it.”

Josephine Olson of Winnetka, IL, was honored with the 2018 Special Recognition Award. Dyslexia “has forced me to become a strong self-advocate,” she says. A senior at New Trier High School in Winnetka, she is an outstanding athlete whose boat came in first among all high schools in the country last year. She looks forward to rowing at Boston University next fall and plans to pursue a law degree, specializing in disability law.

The 2018 Junior Achievement Award was presented to Jack Quirion of Amston, CT. Starting at the age of 10, Jack successfully advocated for four pieces of dyslexia legislation in Connecticut in the past four years through his testimony before the state legislature. A freshman at the Rectory School in Pomfret, CT, Jack has received awards from the CT General Assembly and the office of Lieutenant Governor Nancy Wyman for his work.

Honorable Mentions were awarded to:

Stacey Hafen, co-chair and long-time member of the YAA Selection Committee, was delighted with this year’s winners. “We received many, many outstanding applications,” she said. The committee reviewed over 140 applications from students across the US and Canada. “We are thrilled to honor these remarkable young people."