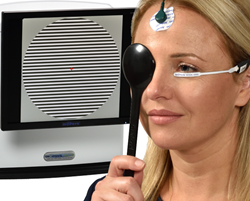 Numerous studies show that PERG devices are sensitive to early stage pathology, and in my clinic, they routinely help me make critical decisions about who to treat, how to treat, and when to adjust therapy.

According to the latest study published in Current Ophthalmology Reports by Porciatti and Ventura[1], alterations in PERG signal—which are discernable in eyes of patients at risk for progression from suspected to manifest glaucoma—precede losses of visual field and optic nerve tissue. The authors noted PERG alterations can be reversible after IOP lowering, showing a strong correlation between the test and functional loss secondary to glaucoma.

Diopsys Inc., the world leader in modern visual electrophysiology, has pledged to continue supporting eye care specialists who use PERG in their clinic, including funding research efforts that explain the myriad of patient and provider benefits associated with PERG testing. The company was instrumental in introducing accessible machines that match the results from laboratory-based equipment, thereby maintaining continuity of care for patients and providing more timely care based on actionable, objective data on visual function from PERG results.

“There is a belief in some circles that PERG is not quite ready for primetime, but I think that is both shortsighted and an incomplete understanding of the strong historical clinical evidence regarding use of this test in glaucoma patients,” said Robert J. Noecker, MD, MBA, “Numerous studies show that PERG devices are sensitive to early stage pathology, and in my clinic, they routinely help me make critical decisions about who to treat, how to treat, and when to adjust therapy.”

PERG is a type of light induced visual response (LIVR). During a Diopsys PERG test, sensors placed on the forehead and skin under the eyes record feedback from the retinal ganglion cells (RGC) in response to a patterned stimulus (e.g., alternating lines or checkerboards). Because loss of PERG signal correlates with loss of function in the RGC, the test provides objective information regarding the presence of optic nerve dysfunction.

In 2017, the Centers for Medicare and Medicaid Services (CMS) announced plans to discontinue reimbursement for PERG during the evaluation of patients with glaucoma. The decision was based largely on a 2006 study that concluded that while the test is useful, additional studies were needed to substantiate its role in the clinic.

There is a large and growing library of literature highlighting the utility of PERG testing. The CMS recommendation largely ignored both earlier and more current clinical research about the use of PERG in evaluating glaucoma. This includes clinical evidence that supports the use of PERG in glaucoma patients and individuals with ocular hypertension. Based on these many studies, it is now well established that PERG is progressively altered in glaucoma suspects[2,3] and glaucoma patients[4,5] prior to visual field loss or loss of optic nerve tissue.[6-8] It is also clinically proven that PERG signal can worsen after IOP elevation[9-11] but improves as interventions are aimed at lowering IOP[12-17]; and that using PERG helps clinicians identify a stage of reversible RGC dysfunction before cell death occurs,[18] thus offering potential to intervene and save vision.

“We respectfully disagree with the conclusions of the CMS regarding the utility of PERG testing in evaluating glaucoma, particularly as it relates to whether PERG has been validated in rigorous clinical trials. In fact, PERG has shown in numerous studies that it is an objective measure of RGC function, and thus, a powerful adjunct to clinical decision making,” said Alberto González García, M.D., Chief Medical Officer at Diopsys. “There is no alternative diagnostic test that affords patients or physicians more sensitive information on the earliest stage of glaucomatous dysfunction in the ganglion cells of the retina. We will continue to work with all our stakeholders to bring greater awareness to in-clinic PERG testing. In the meantime, we will continue to support those in the eye care community who use in-office PERG testing to identify patients who require earlier intervention with FDA approved medications and/or procedures for better outcomes.”

About Diopsys Inc.
As the world leader in modern visual electrophysiology, Diopsys, Inc. (http://diopsys.com/) has done more than any other company to advance the use of electroretinography (ERG) and visual evoked potential (VEP) in the ophthalmic practice. The company’s unique, patented technology provides eye care professionals with objective, functional information about the health of the vision system to aid in the early detection and management of vision disorders, including post-treatment tracking for precise patient management.