Author Chip McCormick’s Newly Released “The Fire Service, The Lighter Side” Recounts Whimsical Tales From a Career As a Fire Chief

“The Fire Service, The Lighter Side” from Christian Faith Publishing author Chip McCormick shares stories from his twenty-seven year career as a firefighter, fire chief, and fire instructor. The fire service is a serious business, but there is a lighter side to it and that is what author Chip McCormick chooses to remember. 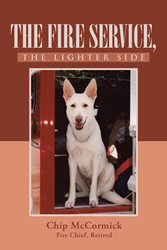 “The Fire Service, The Lighter Side”: the whimsical memoirs of a fire chief who has not seen it all, but has seen a lot. “The Fire Service, The Lighter Side” is the creation of published author, Chip McCormick Fire Chief, Ritired. Chip McCormick is a State-certified fire instructor in three States. Chip joined the Navy and went to firefighting school. It was required training for all hands as there is no place to go when a ship is in the middle of the ocean. When his second term ended, he settled in a small community near a volunteer fire department. One evening, a firefighter stopped at Chip’s house and asked if they could use the back of his property for their weekly drills. He, of course, gave them permission. When the time came, he went outside, along with several other people to watch. It was a total disaster. Almost none of the volunteers had been at the scene of a fire. Chip made a comment to a man standing next to him. The man smiled and asked if he could do better. Chip told the man he learned how to fight fires in the Navy and that he could not do any worse. Chip then asked the man who he was. The man told Chip that he was the fire chief. There are times when one should keep their mouth shut. The rest is history.

“In my opinion, the fire service is like no other. The fire doesn’t care what color your skin is or how tall you are, whether you are male or female. It doesn’t care. The fire is just out to destroy. There is a personal challenge and satisfaction in stopping it without getting destroyed yourself. There is also that satisfaction of saving someone’s property and in some cases their lives.” --Chip McCormick Fire Chief, Retired

After twenty-seven years in the fire service, one would think a fire chief would have seen everything possible. It is, however, just then something unexpected happens. Chip McCormick cannot say how many times he has made the comment, “now I’ve seen it all,” only to learn he has not. He no longer utters those words, because he has learned there is always something new to see and experience. Most of the time, it comes out of the left field. The best unexpected things come from the lighter side, so he has chosen to write about those things.

People can do some really weird things. Some of those things and some of those people almost make sense while others do not. If by chance, one comes across a story within the pages of “The Fire Service, The Lighter Side” that makes no sense, do not worry. It probably did not make any sense to the person to whom it happened. For those who have never worked in or been around members of the fire service, there are things in this book that may give the impression that firemen are cold-hearted and, at times, downright mean. Please, be assured that this is not the case. Firefighters just happen to have a lot on their plates, so they tend to look for the humor in the darkest of situations.

View a synopsis of “The Fire Service, The Lighter Side” on YouTube.

Consumers can purchase “The Fire Service, The Lighter Side” at traditional brick & mortar bookstores, or online at Amazon.com, Apple iTunes store, or Barnes and Noble.

For additional information or inquiries about “The Fire Service, The Lighter Side”, contact the Christian Faith Publishing media department at 866-554-0919.