In a recent article published in Castanea, researchers in Georgia have discovered 27 new plant species not previously reported in the state through the digitization of two large collections at the University of Georgia and Valdosta State University. 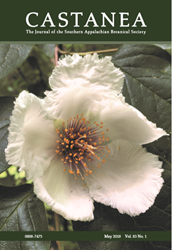 As digitization projects continue, so will the ability to better identify plants that are at risk of disappearing from their current environment and those that are rapidly expanding their territory.

Castanea—Like discovering family heirlooms in an overcrowded attic, biologists worldwide have been turning up new plant species just by digging through samples already shelved in botany collections. In Georgia, massive efforts to digitize plant data have let researchers take a new look at “problem” and misclassified specimens, finding 27 plant species that are new to the state.

An article about their findings, recently published in the newest issue of Castanea, highlights a widespread problem in scientific fields: too much data and too little analysis. Museums, universities and other institutions have long preserved examples of plants that researchers can use as a reference, but these giant collections have been nearly impossible to study on a large scale. Thanks to improved technology, processes and funding, these institutions are now digitizing their plant collections, giving scientists unprecedented access to existing data. In Georgia, the process has revealed numerous plants that have been collected but not fully identified.

The National Science Foundation has been funding digitization of the two largest collections of plants in the state, located at University of Georgia and Valdosta State University. During the digitization process, the curators of these collections have been making lists of species that they suspected are new to the state. The researchers confirmed that 27 plants on those lists had not been previously identified in Georgia.

Of the 27 plant species that had not been previously reported in the state, four are native, with ranges that extend from adjacent states. The Georgia Department of Natural Resources lists two of these likely native species, Appalachian turtlehead (Chelone lyonii) and Cumberland sandreed (Sporobolus arcuatus), as “critically imperiled,” the state’s ranking for rare species at greatest risk of extinction.

In contrast, the other 23 species are widespread weedy or nonnative plants. Some have escaped from cultivation; others were never intentionally planted but could have been introduced from contaminated seed blends. Still other seeds may have scattered naturally or been spread by animals eating the plant’s fruit.

In all, researchers have collected at least 4,000 fern and seed plant species in Georgia but have much to learn from their existing collections. As digitization projects continue, so will the ability to better identify plants that are at risk of disappearing from their current environment and those that are rapidly expanding their territory—not just in Georgia but around the world.

Full text of the article “Additions to the Flora of Georgia Vouchered at the University of Georgia (GA) and Valdosta State University (VSC) Herbaria,” Castanea, Vol. 83, No. 1, 2018, is now available at http://castaneajournal.org/doi/full/10.2179/17-151.

About Castanea
Castanea is the journal of the Southern Appalachian Botanical Society and publishes articles relating to all aspects of botany in the entire eastern United States and adjoining areas. The Southern Appalachians—the nonglaciated, mountainous areas of Alabama, Georgia, South Carolina, North Carolina, Tennessee, Kentucky, Virginia, West Virginia, Maryland, Pennsylvania, and southwestern New York—form an evolutionary center for native plant diversity for the northern temperate regions of the world. The society dates to 1935 and serves all persons interested in the botany of the Southern Appalachian Mountains. The journal encourages submissions of scientific papers dealing with basic research in any field of plant biology, systematics, floristics, ecology, physiology, and biochemistry. For more information about the journal or the society, please visit: http://www.castaneajournal.org/ or http://www.sabs.appstate.edu.