Two winners were selected at this Carnegie Council Student Research Conference: an individual presentation by Patrick Hickey on development and diabetes in Brazil and a group presentation by five West Point cadets on just war theory and cyber-warfare. 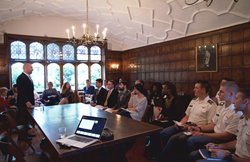 We were thrilled to see such high-quality presentations from a variety of different schools on topics that are very relevant to international politics today. One of the judges even noted that the standard of these presentations surpassed that of some professional conferences.

On May 10, Carnegie Council for Ethics in International Affairs held its fourth annual student conference at its headquarters in New York City.

This year, the Council received 32 applications from 12 universities around the New York City area and East Coast. Out of the 32 applications, nine projects, including one group project from the U.S. Military Academy in West Point, were selected to present at the conference. Two winners were selected: an individual presentation and the group presentation.

The winner of the individual presentation was Patrick Hickey of Marist College in Poughkeepsie, New York. Hickey's presentation was entitled, "The Bitter-Sweet Truth about Development: Brazil, Nutrition, and Diabetes." It advocated the use of tariffs to fight the consumption of junk food and sugary foods.

The winning group presentation came from five West Point cadets, Michael Deegan, John Erskine, Riaz Lane, Samuel Reichenthal, and Jacob Wells. They jointly explained their research project, "A (Restrained) Call to Arms: A Comprehensive Ethical Analysis of Just War Theory in Historically Significant Cyber-Warfare Conflicts." It argued for the use of the United Nations and international law, rather than unilateral counterstrikes, to respond to cyber threats against the United States.

The winners of the competition all received one-year memberships to the Council's Carnegie New Leaders program.

"We were thrilled to see such high-quality presentations from a variety of different schools on topics that are very relevant to international politics today," said the organizer of the conference, Carnegie Council Senior Program Director and Senior Fellow Devin Stewart. "One of the judges even noted that the standard of these presentations surpassed that of some professional conferences."

Other presentations touched on various ethical issues, including refugees, social media and fake news, transitional justice, homelessness, and democracy. The judges panel included scholars from the U.S. Navy, Hunter College, Bard College, and Carnegie Council. The presentations were judged on their originality, persuasiveness, logical coherence, and relevance to ethics.

Carnegie Council would like to thank all those who took part.