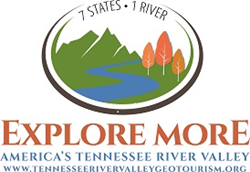 “This new logo is designed to represent the full region and all of the partners served by the TRV mapguide,"

The Tennessee River Valley Stewardship council announces that a new logo for the Tennessee River Valley has been released. The previous logo was adopted in 2010 with the original mapguide launch. At that time, only the greater Knoxville and Chattanooga regions of Tennessee, and a small portion of North Georgia were included on the mapguide project. In 2016 with support of the Tennessee Valley Authority (TVA), the mapguide was expanded to include the full watershed area, a region represented by 7 states and 125 counties. “This new logo is designed to represent the full region and all of the partners served by the TRV mapguide,” says spokesperson, Julie Graham. The design work was created by Graphics South and approved by the Council in May, 2018.

In addition to the redesigned logo, the Tennessee River Valley Stewardship Council has rebranded the tagline from “Where Mountains Meets Water” to “Explore TRV” and has been using the new branding for printed, social, and digital campaigns.

The Tennessee River Valley mapguide serves as an online travel guide to the places and events most respected and recommended by locals. One of the twenty interactive geotourism mapguides developed world wide, ExploreTRV.com provides visitors an insider’s guide to the spectacular geologically diverse Valley sometimes called the “Great Lakes of the South.”