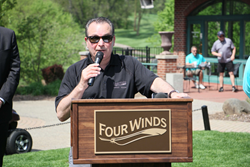 The Pokagon Band of Potawatomi Indians and Four Winds® Casinos are pleased to announce the schedule of events for the 2018 Four Winds Invitational. The announcement was made today at the tournament’s Sponsor and Media Day, held at Blackthorn Golf Club in South Bend, Ind.

The Four Winds Invitational is part of the Symetra® Tour – Road to the LPGA® and takes place Friday, June 8 through Sunday, June 10 at Blackthorn. The LPGA Symetra Tour brings female golfers from over 30 countries to compete throughout the year to become the next generation of professional golfers. At the end of the Symetra tour, the top 10 money winners “graduate” to become members of the national LPGA tour.

“It’s important to point out how fortunate we are as a community to host such a prestigious LPGA event. Ask any of the professional players and they will tell you that the Four Winds Invitational is among the best tournaments on the LPGA’s Symetra Tour each year,” said Tim Firestone, Owner and General Manager of Blackthorn Golf Club. “An event of this significance simply could not happen without the commitment and support of the Pokagon Band of Potawatomi Indians.”

“On behalf of all Four Winds Casinos employees, we are proud to once again be the title sponsor for the 2018 Four Winds Invitational,” said Frank Freedman, Chief Operating Officer of Four Winds Casinos. “We look forward to working with the LPGA, Blackthorn Golf Club and all the other sponsors on a successful tournament.”

“Hundreds of Pokagon citizens live, work and play right here in the city of South Bend,” said Matt Wesaw, Pokagon Band Tribal Council Member at Large. “And as a nation, we’re keenly aware of the special needs in the communities we live. It’s why we feel so strongly about giving back. In the past 6 years, over $430,000 raised at this very golf tournament have been used to help support children and adults of our community who need, or will need, specialized medical services at Beacon Hospital. We are proud to continue this support again this year.”

Admission for the three-day tournament is free.

Monday, June 4
4 p.m. Daddy-Daughter Pro-Am Tournament
The fourth annual nine-hole Daddy-Daughter Pro-Am is scheduled for Monday, June 4. This is a unique opportunity for fathers to play a round of golf with their daughters along with a future star of the LPGA in a 9-hole scramble. Hot dogs and ice cream follow. All proceeds will benefit Beacon Hospital in South Bend. Registration is $50 per player and $100 for a father-daughter team. Teams can register at http://blackthorngolf.com/symetra_daddydaughter/.

Wednesday, June 6
5 – 7 p.m. Ladies Golf 101 Clinic
This event will feature instruction from LPGA professionals and practice, a champagne bar, appetizers and a Q&A with the LPGA Symetra players. The cost is $40 per person; registration is available at http://blackthorngolf.com/symetra_fore/.

Thursday, June 7
5 p.m. Grapes on the Green Wine/Food Tasting
At this unique, new event at Blackthorn, guests drive golf carts along the course, stopping for special wine and food tastings. The cost is $80 per pair with early registration; $100 per pair on event day. Two people per cart, last cart leaves clubhouse at 7:30 p.m. All proceeds will benefit Beacon Hospital in South Bend. Registration is available at http://blackthorngolf.com/symetra_grapes_green/.

Sunday, June 10
7:30 a.m. — Four Winds Invitational 5K Run & Fitness Walk
The fifth annual Four Winds Invitational 5K Run and Fitness Walk is held on the cart paths of Blackthorn Golf Club. The starting point is at 3575 Moreau Ct., which is the back entrance to Blackthorn Golf Club. The 5K Run will start at 7:30 a.m. and the Fitness Walk will start at 7:35 a.m. The Fitness Walk is non-competitive and will not be timed. All proceeds from the 5K Run and Fitness Walk will be donated to Beacon Hospital. Participants will receive a goody bag including an official t-shirt.

To register, visit blackthorngolf.com/symetra. The cost for adults is $25 for the 5K Run, or $20 for the Fitness Walk. The cost for kids 18 and under is $10 for either event. After May 25, registration fees are $30 for the 5K Run and $25 for the Fitness Walk, and $15 for kids 18 and under. Late registrants are not guaranteed a t-shirt. Pre-event packet pick-up and late registration will occur at Blackthorn Golf Club’s clubhouse from noon to 4 p.m. Saturday, June 9 and Sunday, June 10 from 6:30 – 7 a.m. More information is available at blackthorngolf.com/symetra.

11 a.m. — Family Fun Day
Free Family Fun Day will take place at Blackthorn Golf Club during the final round of the Four Winds Invitational on Sunday, June 10. From 11 a.m. to 2 p.m., activities include the Applebee’s Kid Zone with crafts, activities, hot dogs and ice cream; golf games and other free family activities at the Blackthorn Pavilion. Anyone can attend the Family Fun Day. More information is available at http://blackthorngolf.com/symetra_familyday/.

About the Four Winds Invitational
The Four Winds® Invitational was established in 2012 as part of the Symetra® Tour - Road to the LPGA®, and is sponsored by the Pokagon Band of Potawatomi Indians and Four Winds® Casinos. It is held at Blackthorn Golf Club, located at 6100 Nimtz Parkway, South Bend, Ind. The tournament features a field of professional women golfers from around the world. More information is available at fourwindsinvitational.com.

About The Pokagon Band of Potawatomi Indians
The Pokagon Band of Potawatomi Indians’ sovereignty was reaffirmed under legislation signed into law by President Clinton in September of 1994. The Pokagon Band is dedicated to providing community development initiatives such as housing, education, family services, medical care and cultural preservation for its approximately 5,000 citizens. The Pokagon Band’s 10-county service area includes four counties in Southwestern Michigan and six in Northern Indiana. Its main administrative offices are located in Dowagiac, Mich., with a satellite office in South Bend, Ind. In 2007, it opened Four Winds Casino Resort in New Buffalo, Mich., followed by Four Winds Hartford in 2011 and Four Winds Dowagiac in 2013. Four Winds South Bend opened January 16, 2018. It owns and operates a variety of businesses via Mno-Bmadsen, the tribe’s non-gaming investment enterprise. More information is available at http://www.pokagonband-nsn.gov, http://www.fourwindscasino.com and http://www.mno-bmadsen.com.