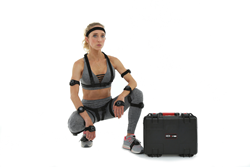 PN PRO is designed to be a straightforward option for professional-level motion capture recording.

Like Perception Neuron 2.0, the new version is an IMU sensor-based full-body motion capture system that can record motion data anywhere without any constraints to space and without the need for optical cameras. Perception Neuron PRO is completely wireless and can be used in any lighting condition both indoors or out, without occlusion, cameras or line-of-site restrictions. With its ist a high tolerance to magnetic fields, and hardware that can withstand dynamic motion, Perception Neuron PRO offers a robust solution for professional filmmakers, animators, researchers and stage performers.

Perception Neuron PRO is a truly wireless system, with the data transmission taking place directly from the sensors to the hub. A 120 Hz maximum output rate will give users smooth and accurate data. Designed to be portable, Perception Neuron PRO comes with a hardshell anti-mag case for storing the motion capture suit and its accessories. One of the system’s most important accessories is the “battery box” case that is used not only for storage of the sensors, but for calibration. The sensors are calibrated in a process where they are placed inside the box and the box is moved as the system directs. The box also works as a charging station where the sensors can be recharged all at once providing the convenience of continuous use.

The sensors themselves are enclosed in housing that then snaps onto the suit straps.
The housing also facilitates a button which can be used to turn the sensors on or off.

“We are always looking toward the future and thinking about what our audience might need next,” says Roch Nakajima, president of Noitom International. “Perception Neuron PRO is aimed at creators seeking to capture intense motions for big-budget productions. PN PRO is designed to be a straightforward option for professional-level motion capture recording. Without optical cameras to set up, and without any limits to space and light, directors and animators can expect clean and accurate results that will match the scale of their project while saving on time and costs.”

Perception Neuron PRO comes with a case that is used for storage and calibration.

The entire Perception Neuron PRO system is stores in an anti-mag case.

The sensors themselves are enclosed in housing that snaps onto the suit straps.