Though most antiques are attractive, useful and safe, some treasures from the past can pose a hazard. The experts at Kovels list 5 collectibles that could cause harm. 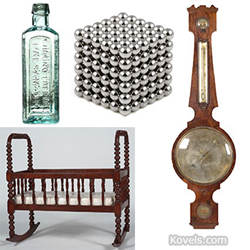 Kovels - 5 vintage collectibles that can be dangerous

The Kovels suggest collectors take care when shopping at antiques stores, flea markets and garage sales, and be aware of the dangers some older items can pose. Old firearms, war souvenirs like hand grenades, cannon balls or boxes of bullets, and old tools can pose an obvious hazard. Kovels lists 5 innocent-looking antiques that can also cause harm.

1. Old medicine bottles with contents containing drugs. Even fumes in closed spaces can pose a risk. The active ingredients of some old medicines may be changed over time. Antique “Oil of Vitriol” can have sulfuric acid and “Aqua Fortis,” nitric acid. Even lots of bitters have heroin or morphine or other pain killers. Look for a product name on a bottle with medicine—or household cleaning products or poisons—before opening. Ask a pharmacist if there are questions. Empty the bottles if there is any chance a child could find it.

2. Jarts. Old toys can be tempting and fun. Jarts, a lawn game popular in the 1980s, had four large darts with weighted metal tips, and two ring targets placed on the ground. The darts are thrown at the target. The game was banned in the U.S. because of thousands of children were injured. There were even four deaths. Consumer warnings were printed on the packaging, but the sale of Jarts was finally banned in 1988.

3. Toys with tiny pieces children can swallow. In the late 1970s, Mattel launched a line of toys based on the sci-fi TV series Battlestar Galactica. Kids loved the Viper, the Cyclon Raider, the Scarab and the Stellar Probe. But a child died after choking on a tiny spring-loaded missile, and Mattel recalled the toys and suspended production. Another dangerous toy is Buckyballs, a set of small, powerful magnetic balls that could be molded into different shapes, sold as an adult “stress reliever” desk toy in 2009. Some small, shiny pieces were swallowed by kids. The balls attract each other inside the body and they can cause serious intestinal injury. Warnings on the packaging were deemed ineffective and the toy was recalled in 2012 and banned in 2014. But the ban was lifted in court in 2016 and Buckyballs are now being sold again.

4. Things with mercury. Antique clocks, thermometers, barometers, lamps and even mirrors may contain mercury. Dangerous exposure may result from breakage. In some states, antiques with mercury are prohibited from sale.

5. Old cribs, playpens and high chairs. An old crib may be adorable but too dangerous to use. Cribs and playpens were made with slats spaced too far apart, allowing a baby’s body, but not head, to get through. Plus, modern mattresses or padding may not be an exact fit, leaving dangerous gaps. In 1974, the Consumer Product Safety Commission (CPSC) established standards for slat spacing and crib dimensions to ensure safety, and stopped sales of old cribs. The wooden high chair with a smaller footprint may be folksy but tip easily. Decorative cutouts may also pose a risk. Old wooden furniture from 1900 to the 1970s may be decorated with lead paint, poisonous if swallowed.