Miguel Lopez de Leon is honored with four awards from two different literary awards programs for “The Light Dweller” and “The Covens of Elmeeria,” his latest fantasy novels for teens and young adults. 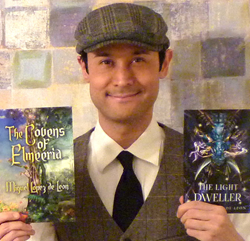 My favorite part about the author’s writing was the sheer imagination and creativity that was used to create both terrifying and enchanting characters, as well as his ability to create a whole world unique to other popular science fiction settings.

Miguel Lopez de Leon started writing as a hobby, crafting short stories for several magazines, and online publications. That passion soon flourished into his first fantasy series, the award-winning “Galadria” trilogy. His latest novels are also making a mark in the young adult literary world with impressive honors and recognition in both the Nautilus and Reader Views literary awards programs.

Both stories feature the importance of self-worth, with the protagonists in each growing into their own as they overcome tremendous obstacles to realize their full potential. “The Light Dweller” is about Ben, a 12-year-old boy who finds a hidden world far below the Earth’s surface, and must help its populace save the only light source available or risk being plunged into darkness forever. As noted by the author, “Throughout 'The Light Dweller' Ben is dealing with his own internal battles. Since he was badly bullied for many years, he has a difficult time trusting people. Ben finds it a challenge to look someone in the eyes, let alone to go on a dangerous quest. He’s an unlikely hero full of self-doubt and fear, who is constantly fighting against his own insecurities.”

“The Covens of Elmeeria,” on the other hand, takes place in a prosperous kingdom where witches are hated and scorned. But when enemy soldiers take the king and queen hostage, Crown Princess Nia must convince a coven of sorceresses outside the kingdom to help her overtake the soldiers to save her family. Of “The Covens of Elmeeria,” De Leon says, “Although Nia wants to be taken seriously as a leader, the choices she has to make, and the situations she has to endure, are ones that anyone would find challenging. She has to overcome incredible odds, and deal with devastating loss, all in a very short amount of time.”

In addition to the strong characters, readers are captivated with the author’s world-building and storytelling talents. “My favorite part about the author’s writing was the sheer imagination and creativity that was used to create both terrifying and enchanting characters, as well as his ability to create a whole world unique to other popular science fiction settings” -- Faryal Jabbar on “The Light Dweller,” Reader Views Kids. “Clever plotting and rich descriptive passages make this a fun glimpse into a new fantasy realm. 'The Covens of Elmeeria' is a believable and inspiring fantasy journey.” -- Foreword Clarion Review

The Nautilus Awards represents “Better Books for a Better World.” Now in its 20th year, this book award program seeks, honors, awards and promotes print books that inspire and connect our lives as individuals, communities, and global citizens. The Reader Views Reviewer’s Choice Awards, now in its 11th year, honors and celebrates writers geared for the North American reading audience.

“It’s such an honor to receive these awards, and I’m so grateful to both Nautilus, and Reader Views.” -- Miguel Lopez de Leon

Miguel Lopez de Leon lives in Los Angeles. He writes young-adult and middle-grade fantasy novels. His debut novel “Galadria: Peter Huddleston & The Rites of Passage” was chosen by Kirkus Reviews as one of the "Best Books of 2014."

Before becoming a novelist, Miguel started out as a short-story writer. Over 30 of his short stories were chosen for publication, and have appeared in various magazines and collections. One of Miguel's short stories, “A Working Professional,” won first place in Writer's Digest Magazine's "Your Story #24" writing contest, and beat out over 550 other international submissions.

"The Light Dweller" (ISBN 9780692888582, Galadria Worldwide 2017) and “The Covens of Elmeeria” (ISBN 9780692832837, Galadria Worldwide 2017) are available on Amazon in paperback and on Kindle. For more information visit http://www.miguellopezdeleon.com and connect with him on Twitter and Facebook. Publicity contact is http://www.readerviews.com. Review copies available to the media upon request.

"The Light Dweller" and "The Covens of Elmeeria"