6000 Participants from 50 Nations Convene at March of Nations Jerusalem

March of Remembrance and Marches of Life Honor Holocaust Survivors and Recognize Beauty Grown from Ashes in Jerusalem, the Dominican Republic, Houston and Beyond 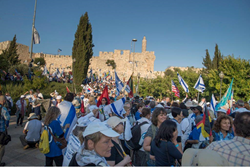 Marching from Sacher Park to the Old City

On Tuesday, May 15, 2018, the March of the Nations took place with 6000 participants from Israel and more than 50 other nations in honor of the 70th anniversary of the State of Israel. The March ended with a Festival of Life, where the nations proclaimed their solidarity with Israel and their determination to raise their voices against anti-Semitism in their respective countries.

The international March of Life movement initiated by Jobst and Charlotte Bittner in Germany had invited Christians from all over the world to Jerusalem on this special date. During the two days prior to the March, there was an international conference with 2000 participants, which provided the opportunity to personally confront the issues of the Holocaust and learn about the historic anti-Judaic stance of Christian churches over the past 2000 years.

At the kick-off event of the March in Sacher Park, Christians from different nations related the involvement of their countries and families in the Holocaust; they expressed their resolve to resist anti-Semitism and to stand with Israel. Among them was Bärbel Pfeiffer, whose grandfather had helped build the Auschwitz extermination camp. Nir Barkat, the mayor of Jerusalem, and Yehuda Glick, a renowned Knesset (Israeli Parliament) member, enthusiastically welcomed the March of the Nations.

The March set out with a display of international flags. Israeli passers-by were visibly moved by the wave of friendship and solidarity as the March made its way to Sultan's Pool for the closing ceremony. Fifteen hundred Holocaust survivors attended the closing event as guests of honor. The "Festival of Life" celebrated the 70 years of Israel with Israeli and international artists. Israeli President Reuven Rivlin thanked the participants via video for a "sign of true friendship." The Israeli Minister for Communication, Ayoob Kara and Josh Reinstein of the Knesset Christian Allies Caucus both spoke about the significance of the March. As a symbol of the Israeli saying “mi shoa le t’kuma – from the Holocaust to new life,” Holocaust survivor Yechiel Aleksander came to the stage with his entire family – children, grandchildren and great-grandchildren.

On April 22,1500 people marched in pouring rain in Bogota, Colombia, in the Marcha de la Vida (March of Life/March of Remembrance) to demonstrate their commitment never to remain silent in the face of persecution, prejudice, and indifference. In the Dominican Republic, 2000 people took part in that nation's first March of Remembrance to take a stand against signs of impending genocide.

On Sunday, April 15, Houstonians rallied for the seventh year in a row for the Holocaust March of Remembrance. Still suffering from the aftermath of Hurricane Harvey-related floods, hundreds gathered at Rice University to remember the Holocaust, honor survivors and their families, listen to personal testimonies of suffering and triumph, remember those who served as liberators, upstanders, and rescuers, and march as a sign of their commitment never to forget the price of remaining silent in the face of injustice. The March of Remembrance opening service welcomed pastors, rabbis, government officials, and community leaders, as well as professors from the Texas A&M System and Rice University. The Texas A&M Galveston Corps of Cadets contributed to the pageantry and solemnity of the memorial walk portion of the event.

Prior to the service, Ashley Stringer and Sheena Doorn provided worship music, and Dramatic Truth Ballet Dance Theater from Kansas City performed a Holocaust-themed ballet. Local Hillel students read names of Holocaust victims. Prior to the blowing of the shofars, a choir from The Church at Bethel's Family sang. Doug Stringer welcomed all the participants before Texas Holocaust and Genocide Commissioner, Rabbi Brian Strauss of Congregation Beth Yeshurun pronounced a rabbinic blessing over a stone ceremony with survivor Ruth Steinfeld and her daughter; the ceremony symbolized the passing of the torch of telling the lessons of the Holocaust to the younger generations. Rabbi Strauss also invited everyone in the audience to stand to demonstrate their commitment to be upstanders in confronting injustice. Paul Sarvadi, CEO of Insperity, and Dr. Victoria Sarvadi read poignant proclamations written by government leaders, and Houston Police Chief Art Acevedo encouraged the crowd to respond to unrighteous behavior with integrity. Israeli Consul General Gilad Katz also addressed the assembly, followed by German Consul General Thomas Meister. Survivor and descendant testimonies followed, featuring Ruth Steinfeld, as well as Steve Finkelman, child of survivor Wolf Finkelman. Other speakers were Luisa Lupprich and Desiree Syring, both repentant Nazi descendants; they shared stories of their families’ history as perpetrators and expressed their remorse for their ancestors' role in the Holocaust. Many attendees streamed forward to embrace these courageous young women!

There have been marches in over 300 cities worldwide. This year in the USA, marches were held in Arkansas , Arizona, California, Colorado, Florida, Hawaii, South Carolina, Texas, and Washington.

Visit our website for event videos and additional information: http://marchofremembrancehouston.org

Flags and Marchers flood the streets of Jerusalem

Many Nations Stand for Israel & the Jewish People to say "Never again!"

Major-General Doron Almog sits with March of Life Founder Jobst Bittner who is also a Nazi descendant, and the Anna-Suzette Pfeiffer, great-granddaughter of the man who wired Auschwitz.

6000 take a stand against anti-Semitism.