VetStem Biopharma is Pleased to Share the Success Story of Maverick, who was Treated with Stem Cell Therapy by Dr. David Monti at Ridge Animal Hospital

Maverick, a golden retriever, was successfully treated for osteoarthritis in his hips with VetStem Regenerative Cell Therapy by Dr. David Monti. 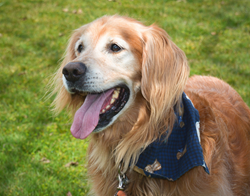 His stamina is unbelievable. We were used to seeing a ‘senior’ dog playing fetch but now we have a totally different dog who doesn't want to stop chasing the ball.

Maverick, an 8-year-old golden retriever, was rescued from a local humane society in February 2017. His adopters had recently lost their beloved 13-year-old golden retriever, Zeke, and wanted a companion for their other dog, Reilly. Maverick was listed as dog aggressive at the shelter but when he met Reilly, he showed no signs of aggression and they became fast friends. Irene decided to adopt Maverick hoping that he had several years of a good quality of life left before he started experiencing some of the “old age” ailments that Zeke suffered from. Unfortunately, Maverick showed signs of severe osteoarthritis from the get-go. He could barely walk up stairs and instead he would “bunny hop,” which is often a symptom of painful hips. He could not jump onto the bed, couch, or into the car. Fortunately for Maverick, Irene sought medical treatment immediately.

Irene took Maverick to her veterinarian where X-rays revealed that Maverick suffered from bilateral hip dysplasia which caused severe osteoarthritis in his hips. He was also extremely overweight at 105lbs, which likely contributed to the pain in his hips. In March 2017, Maverick began a rehabilitation routine of acupuncture and swimming in addition to joint supplements. Irene started Maverick on a diet as well. Unfortunately, Maverick did not experience noticeable relief, so Irene sought further treatment options. In September 2017, Irene reached out to VetStem to receive a list of local veterinary stem cell providers. She was referred to Dr. David Monti of Ridge Animal Hospital where she took Maverick for examination. Dr. Monti determined Maverick was a good candidate for VetStem Regenerative Cell Therapy and moved forward with treatment.

In November 2017, Maverick underwent a minimally invasive procedure in which a small amount of fat was collected from his abdomen. The fat tissue was packaged and shipped to the VetStem laboratory in San Diego, California where it was processed, and injectable stem cell doses were created. The injections were shipped back to Dr. Monti and approximately 48 hours after Maverick’s fat collection, Maverick received injections of his own stem cells into each hip and intravenously.

Approximately two months after his stem cell therapy, Irene reported that Maverick was able to walk up the stairs normally without “bunny hopping.” She also noted that he was attempting to jump into the car, which he never did before treatment. At about ten weeks after treatment, Maverick began jumping on the sofa.

Now, just six months after treatment, Maverick is like a new dog. He weighs a healthy 80lbs and has a renewed lease on life. Irene stated, “His stamina is unbelievable. We were used to seeing a ‘senior’ dog playing fetch but now we have a totally different dog who doesn't want to stop chasing the ball. If we stop, Maverick will take the ball to someone else who will continue to throw the ball.” She also reported that the therapy exceeded her expectations and that she would do it all over again.

Stem cells are regenerative cells that can differentiate into many tissue types; they have been shown to reduce pain and inflammation, help to restore range of motion, and stimulate regeneration of tendon, ligament and joint tissues. In a peer reviewed, blinded study for chronic osteoarthritis of the hip joint in dogs, it was found that dogs experienced decreased lameness and pain after receiving VetStem Cell Therapy.

About David Monti DVM
Dr. Monti, a 1986 graduate of The Ohio State University, joined the Ridge Animal Hospital in 1986 and became a partner in 1990. His primary clinical interests are surgery and ultrasonography (cardiac). Outside of practice he enjoys reading, computers, and flying small planes. He's the proud father of the following pets: Coco and Angel, and Woody. Dr. Monti has been VetStem certified since 2009.