A Novel Mode of Communication in Mating Frogs

In an article recently published in Herpetologica, researchers studied various means of communication in Spotted Reed Frogs. What they discovered was a never before seen communication method of foot tapping. 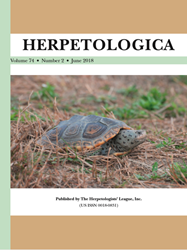 The spectacular foot-tapping behavior adds yet another layer of complexity to the multimodal signaling system found in African reed frogs.

In an article recently published in the journal Herpetologica, researchers examined the means of communication among Spotted Reed Frogs at the Amani Nature Reserve in Tanzania. Prior work by the same team of scientists focused on the release of chemicals as a form of communication, and a logical extension of that work was to examine the role that color of the vocal sac plays in attracting mates. The experimental apparatus used by the researchers included audio recordings of both mating and aggression calls emitted by the frogs, as well as an artificial vocal sac that would expand and contract in synchrony with the calls.

Mating calls from male frogs had characteristics that easily distinguished them from aggression calls. If an encroaching male did not respond to the aggressive calls and move away, the residing male would engage in fighting. The researchers suggested that the colorful patch on the frog’s vocal sac is more related to chemical communication, such as pheromones, than to visual communication. However, the researchers observed a never before seen foot tapping as a communication method that is thought to help create a seismic signal when environmental factors intrude on acoustic methods. The discovery of this form of communication is leading researchers to question its overall role in both mating and male-to-male interaction.

Researcher Iris Starnberger stated, “When we planned our field experiments in Tanzania, we were aiming to gain more insights into the role of the vocal sac in acoustic, visual and chemical communication in reed frogs, which we did, but the most surprising result was that we were testing Frog Astaire all along. The spectacular foot-tapping behavior adds yet another layer of complexity to the multimodal signaling system found in African reed frogs.”

Further research is necessary to fully examine the newly discovered foot-tapping behavior, as well as to further examine the chemical cues emitted from the vocal sac.