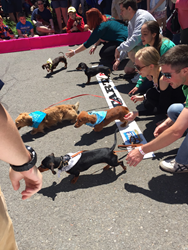 Saturday May 26th, Lake Compounce will be hosting the 5th annual Pink’s Hollywood Hotdog Weiner Dog 100 Race, a Dog Fashion show, and the 3rd annual hot dog eating contest. The Connecticut Dachshund Rescue and Pet Services (CTDRPS) organization has partnered with the park to present the Wiener Dog 100 Race, which will feature 100 lightning fast Dachshunds competing in heats of five for the ultimate distinction of 'Fastest Hot Dog.' First, Second and Third place metals will be awarded on a three-tiered podium.

Dachshund Rescue and Pet Services founder Anne Jordan says, "We are tickled PINK to be invited to conduct our Dachshund races at Lake Compounce. We are thrilled with the number of racers attending and the wide variety of Dachshunds you'll get to see. It's going to be fun for everyone!"

Immediately following the adorable festivities, the park will be holding their 3rd annual hotdog eating contest for a chance to win an all-expense paid mini vacation at Bear Creek and Lake Compounce. Participants must be at least 18 years of age and will be given an allotted time to eat as many hotdogs as they can. Preregister to participate by contacting Lake Compounce at sociallc(at)lakecompounce.com.

Pink's Hot Dogs, a Hollywood Legend since 1939 is a family owned business and was named by Fox News as number one in a list of Top Ten Hot Dog Stands in the U.S. The famous hot dogs attract celebrities such as, Jay Leno, Martha Stewart, and Food Network superstars, Giada de Laurentiis and Guy Fieri. Pink’s first East Coast location was added to Lake Compounce in 2014.