Foresight Institute, a leading think tank, research, and public interest organization focused on molecular manufacturing and other transformative technologies, announced the 2018 winners for the prestigious Feynman Prizes, named in honor of pioneer physicist Richard Feynman, for experiment and theory in nanotechnology. “The problems of chemistry and biology can be greatly helped if our ability to see what we are doing, and to do things on an atomic level, is ultimately developed — a development which I think cannot be avoided.” - Richard P. Feynman, 1959 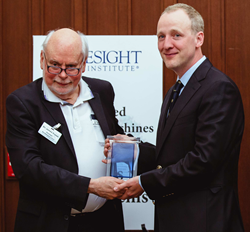 Foresight Institute, a leading think tank, research, and public interest organization focused on molecular manufacturing and other transformative technologies, announced the winners for the 2018 Foresight Institute Feynman Prizes. These are given in two categories, one for Experiment and the other for Theory in nanotechnology/molecular manufacturing.

Prof. O. Anatole von Lilienfeld, Head of his eponymous lab in the Department of Chemistry at the University of Basel, Switzerland, received the Theory Prize. The Foresight Institute Feynman Prize for Experimental work was awarded to Andreas Heinrich and Christopher Lutz.

Professor von Lilienfeld, of the Institute of Physical Chemistry and National Center for Computational Design and Discovery of Novel Materials (MARVEL) at the University of Basel’s Institute of Physical Chemistry received the Theory Prize for introducing innovative new ways to accelerate QM quality predictions across materials compound space by multiple orders of magnitude. Previous methods enable the calculation of relevant electronic properties and are universal by construction—as such they are ideally suited for the unbiased virtual exploration of compound space, but are relatively slow. It is foreseeable that these methods, newly developed by Prof. Lilienfeld, will remove the computational bottleneck conventionally imposed by QM.

He is also interested in pseudopotentials, van der Waals forces, density functional theory, molecular dynamics, and nuclear quantum effects. As of Dec 2014, Anatole serves as a member of the Editorial Board of Nature's Scientific Data.

Foresight Institute 2018 Feynman Prize – Experimental
For advances in manipulating atoms and small molecules on surfaces and employing them for data storage and computation.

The team of Christopher Lutz (IBM Research) and Prof. Andreas Heinrich (IBS Center for Quantum Nanoscience), long-time colleagues, were awarded The Experimental Prize for their seminal contributions in manipulating atoms and small molecules on surfaces and employing them for data storage and computation.

Professor Heinrich, Director of the Institute for Basic Science’s Center for Quantum Nanoscience at Korea University of Science and Technology, is a world-leading researcher in the field of quantum measurements on the atomic-scale in solids. Andreas is fascinated by the world of atoms and nanostructures, built with atomic-scale precision. He is especially keen on educating the public on nanoscience as demonstrated by the 2013 release of the movie, based on his lab’s work, “A Boy and His Atom.”

Christopher Lutz, at IBM Research's Almaden Research Center has a passion for nanoscience that comes from his unique perspective on the world. "When I view the world, I see a series of computations … a leaf falling from a tree performs many computations in the process of falling … its motion takes into account the pull of gravity and resistance of the air to determine the speed of falling. Look closer and the motions of the atoms perform intricate computations in order to follow the laws of physics. My work at IBM centers on finding ways to understand the patterns in the tiny world of atoms and how to steer them towards doing the computations we want."

Mr. Lutz and Prof. Heinrich created atomically precise structures that range from a few atoms to structures of amazing complexity. Lutz and Heinrich demonstrated potent teamwork over many years, yielding remarkable progress toward Richard Feynman's vision of controlling matter at the ultimate scale of atoms.