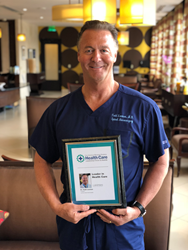 Prominent spinal neurosurgeon Dr. Todd H. Lanman has been honored by the Los Angeles Business Journal as one of its 2018 ‘Leaders in Health Care,’ taking home the prestigious award at the 2018 Health Care Leadership Forum & Awards last week.

Lanman and his practice earned the distinguished title in the category of ‘Medical Group CEO,’ joining only a select few of individuals and organizations within the Greater Los Angeles region, those of which also included Cedars-Sinai Medical Center; Erik G. Wexler, the Chief Executive of Providence St. Joseph Health Southern California; and Marc Eckstein, Medical Director of the Los Angeles Fire Department.

Dr. Lanman’s medical group, Lanman Spinal Neurosurgery, which is based in the heart of Beverly Hills, is affiliated with Cedars-Sinai Medical Center’s Institute for Spinal Disorders and UCLA Medical Center.

Considered to be one of the leading innovators in his field of spine medicine, Dr. Lanman has nearly three decades of advancement in spinal care and motion preservation under his belt.

He is often called upon to lead clinical trials for new procedures, most recently that of which included serving as the Principal Investigator on the 7-year study comparing two-level artificial disc replacement in the cervical spine, using the Prestige LP device, with cervical fusion.

His leadership on the trial helped lead to the procedure’s FDA approval in Summer 2016, becoming a major medical breakthrough for the field and giving patients an alternative to motion-restricting fusion surgery. His extensive seven-year study, documenting the “statistical superiority” of the two-level ADR procedure, was published last year in the Journal of Neurosurgery: Spine.

Lanman is sought after by patients from around the world for his expertise in the world of spine care and motion preservation, often calling many high profile celebrities and business leaders his clients. He has also been named one of the country’s top doctors in his field in the Hemispheres Magazine, The Los Angeles Times and The Hollywood Reporter, in recent years.

The Health Care Leadership Awards pay tribute to the city’s finest doctors, medical practices and hospitals, all of which have made phenomenal strides in providing top-notch health care to patients and setting industry standards.

Dr. Lanman is often called upon to act as a media educator and contributor in print and on television, and has published more than a dozen peer-reviewed articles, in addition to authoring book chapters and presenting more than two dozen papers at national and regional medical society conferences. He has also remained an assistant clinical professor at UCLA for the past 20 years.

He most recently oversaw the launch of his own charitable enterprise, The Lanman Foundation for Spinal Advancement and Innovative Health, focused on advancing the science of spine health and motion preservation. The Lanman Foundation also provides surgical care and procedures to those injured serving in the United States military.

This is Lanman’s second year being honored by the Los Angeles Business Journal, previously being named a select finalist of theirs in last year’s forum and awards.