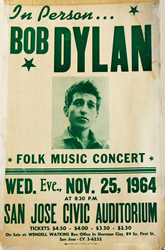 The poster was over printed and ticket buyers were given a concert poster after their purchase.

Avid collector, Andrew Hawley, announces his search for original 1964 Bob Dylan San Jose boxing style concert posters. This California tour promoted Dylan’s fourth album. According to Hawley, “The acoustic concert tour visited eight cities including San Francisco, Sacramento, Pasadena, Santa Barbara, San Diego and three other venues. This was the first time Dylan had played in San Jose. He would return a year later for another concert. Joan Baez was a regular guest star and would join Dylan for duets. This poster was printed by the Tighlman Press Company. Tighlman printed the 14 x 22 inch poster on cardboard. This two color poster features a picture of Dylan looking up and venue information about the show. The poster was over printed and ticket buyers were given a concert poster after their purchase. This means there may be clean unweathered posters in existence.” For examples of Dylan boxing style poster go to http://www.vintageconcertposterbuyer.com/boxing_style/bob_dylan.html.

If you have an original Bob Dylan San Jose concert poster, Hawley is willing to pay $5,000 cash for each concert poster. He is also interested in any vintage 1963-1966 Dylan concert posters. Any condition accepted. Please call 310-346-1965 or email andrew (at) vintageconcertposterbuyer.com.