Schizophrenic Saint Turns World's Fastest Painter with a Noble Cause

World’s fastest landscape, realistic and abstract paintings, by Parijoy Saha, made in less than 1/5th fraction of a second each and 11 new methods of painting with bare hands invented with each method taking less than 30 seconds to complete a painting. 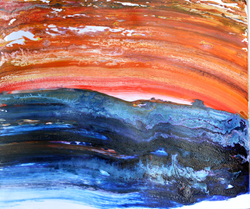 Parijoy Saha is an innately talented self-taught artist. His active mind sends quick decisions to his hands which results in sharp reflexes, precision and energy while painting. He depends on intuition more than reasoned thought while painting.

Parijoy Saha, a schizophrenic saint, born on February 14, 1974, from Kolkata, West Bengal, India, is the amazing world's fastest painter. He has discovered new painting techniques that make him able to paint realistic, abstract and landscapes paintings in less than a second. Parijoy Saha, also an Indian Saint, spreads his teachings online with the help of his unusual art.

Another extraordinary fact about the World’s fastest painter is that he is a 90% disabled patient of chronic Schizophrenia. In spite of the seriousness of his illness he has been extraordinarily creative and has received state level, national level and international recognition, awards and record certificates for his unique contribution to the world of art. For his extraordinary creativity he has received a State Award from the Government of West Bengal for the category of “Outstanding creative adult person with disability”. He is expecting a National Award from the Government of India this year. And also he has been awarded an honorary Doctorate Degree from the World Record University, United Kingdom, for his novel methods of painting.

Parijoy Saha is a 90% disabled patient of paranoid schizophrenia. He has been constantly suffering since the last 21 years due to his hallucinations and delusions. He hears voices, sees things, gets tastes and smells which do not exist in reality. He says that these are caused by excessive imagination. He suffers from fear, trauma and constant tensions due to his constant hallucinations and delusions.

But in spite of his struggles and obstacles he has made a unique contribution to the world of art. His 11 novel methods of painting within 30 seconds with bare hands are a new form of abstract speed art.

The money that comes from the sale of Parijoy Saha’s paintings is used for spreading his teachings worldwide and for his ashram expenses which is a charitable cause. He is an Indian Saint and his other name is Swami Tapasyananda puri. His paintings are available for sale at :
http://www.parijoy-saha.pixels.com

Parijoy Saha’s teachings are also available at this website for the welfare of mankind. People who visit his website to see his unusual paintings also get to read about his teachings.

His basic teaching is that everyone should pray to God and tell him that they want to do everything right on their part and that they do not want to do anything wrong on their part. Once they make this prayer, it becomes God’s responsibility to guide them and show them the right path.

He has endured a lot and for long for his noble mission and is still going on with determined will as his dream slowly turns into reality as God fulfills his genuine prayers for all.

Parijoy Saha is an innately talented self-taught artist. His active mind sends quick decisions to his hands which results in sharp reflexes, precision and energy while painting. He depends on intuition more than reasoned thought while painting. He has a quick thought process when he paints and also has a great dexterity of hands. Only because of all these qualities he is able to create wonderful paintings one after another with such great ease and in such less time.

Parijoy Saha uses white glue and water colors to make his paintings and white glue dries up very fast and therefore the paintings had to be made fast.

He also makes sculptures, vegetable and fruit carvings and has also designed stage sets for Aishwarya Rai, the former Miss World from India.

Before Parijoy Saha was diagnosed with paranoid schizophrenia in 2002, he was working as a chef. He graduated in hotel management in 2000. His illness forced him to take up his hobby of painting with bare hands as his profession because he was no longer fit enough to do a regular job.

Here’s a video which summarizes his achievements: https://youtu.be/NofvPN_I-Ew

If you want to contribute for his noble cause you can buy Parijoy Saha’s paintings and prints from his website which is: http://www.parijoy-saha.pixels.com

You can see Parijoy Saha’s record breaking videos at his youtube channel, the link of which is given below: https://www.youtube.com/user/parijoy

Photographs of the fifty one paintings made in 35 minutes are available in Parijoy’s Facebook album, the link of which is given below:
https://www.facebook.com/pg/worldsfastestpainter/photos/?tab=album&album_id=1831172830490586

Ripley's Believe It or Not! cartoon.

Parijoy Saha with the World's fastest landscape painting made in a 1/6th fraction of a second.

Parijoy Saha with the World's fastest realistic painting made in a 1/5th fraction of a second.

Parijoy Saha with the World's fastest abstract painting made in a 1/5th fraction of a second.

Parijoy Saha with his world record certificates and awards.