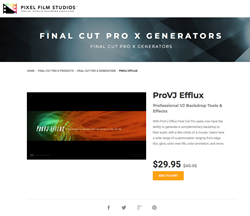 With ProVJ Efflux Final Cut Pro users now have the ability to generate a complementary backdrop to any audio file with ease! Users have a wide range of customization including edge blur, glow, color over life, color animation, and much more!

ProVJ Efflux Final Cut users can create a unique visual backdrop complement any audio file all with a click of a mouse. As a generator effect users have the ability to stack multiple generators with personalized media. Users have control over speed, birth rate, life, angle, spiral, scale, and much more all within Final Cut Pro.

ProVJ Efflux was professionally designed to work seamlessly inside of Final Cut Pro X. As a generator ProVJ Efflux can be dragged and dropped onto media and previewed in real time. With the published parameters found in the FCPX inspector, users have the ability to make further adjustments with beginner-friendly controls.