Marine Dream IPA is the second beer in the KFiSH Coronado Art Series. 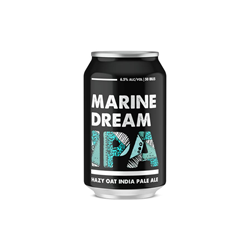 Marine Dream is a hazy IPA brewed with oats and London III yeast for a pillowy mouthfeel and an abundantly tropical flavor profile.

As summer approaches, Coronado Brewing is offering beer drinkers another tasty IPA in a can with the release of its next Art Series beer, Marine Dream IPA. The Coronado Art Series is an annual collection of four beers that features custom beer label art by a local artist. This year’s artist – Kelcey “KFiSH” Fisher – is a street artist and muralist known for his distinct style featuring unique patterns, detailed brushstrokes, and soft primary hues. The yearlong collaboration with KFiSH debuted earlier this year with Coco Chaos IPA – Marine Dream is now the second beer in the series with the last two beers scheduled for September and December releases.

Marine Dream is a hazy IPA brewed with oats and London III yeast for a pillowy mouthfeel and an abundantly tropical flavor profile. It was brewed using a blend of Citra, Mosaic and Vic Secret hops, and sits at a very drinkable 6.5% ABV. “Marine Dream was originally brewed as a small-batch R&D beer that quickly grew in popularity for us,” noted Mark Theisen, Head Brewer, Coronado Brewing Company. “It’s always fun bringing small-batch beers back for fans on a larger scale, and in packaged formats.”

Marine Dream IPA will debut in time for Memorial Day weekend at Coronado Brewing’s three locations on Friday, May 25 in 6-pack cans and on draft. The beer will hit broader retail availability in June and will be available to buy in stores throughout Coronado’s distribution network, while supplies last. For more information about Marine Dream IPA, visit http://www.coronadobrewing.com. Stay Coastal. Cheers.

Label Copy:
Marine Dream is brewed with oats and London III yeast for a smooth mouthfeel and hazy, New-England-style appearance. Citra, Mosaic and Vic Secret give this beer a bright, tropical profile with a lingering juicy fruitiness.

About Coronado Brewing Company
In 1996, when craft beer was still a foreign term and San Diego County was home to only a handful of breweries, the Chapman brothers Ron and Rick opened a brewpub in their hometown of Coronado. Today CBC stays true to their San Diego roots, brewing abundantly hoppy West Coast-style ales, which are available today in 14 US states and 12 countries. In addition to the long-established pub in Coronado, the company opened a tasting room inside its San Diego production facility in 2013, and a tasting room and restaurant in Imperial Beach, California in 2014. Coronado Brewing Company was honored in 2014 with one of the brewing industry's most prestigious awards—World Beer Cup Champion Brewery and Brewmaster for a Mid-Size Brewing Company.