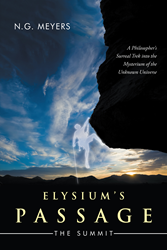 “Elysium’s Passage: The Summit” by N.G. Meyers is a fantasy fiction book about a British philosopher who finds himself in an altered state of reality after experiencing a near fatal fall while climbing to the summit of a remote mountain in the Andes. This debut novel marks book one in the Elysium Series.

While his body remains in a coma, James awakens in a bewildered state just before encountering two mysterious men on the summit that have very different perspectives on the nature of reality than him. Over the next year, before returning to his body in London, he is challenged to re-examine his understanding of life’s meaning and purpose, far beyond anything he previously believed, or could believe.

“Life’s challenges have taught me what the story’s hero is learning on his journey,” said Meyers. “Also, the hero’s profession as a philosopher fits with my ongoing reading in philosophy, physics, and an assortment of literature that has provided me an excellent orientation for the subject matter.”

The book “…raises questions that have echoed through the ages, including about where we come from, where we are going, who we are—and whether we are truly able to find contentment,” stated a Clarion Review.

The Plains of Elysium is a place described by Homer, Hesiod, Virgil, and many other poets as the paradisiacal afterlife realm reserved for heroes. The Elysium’s Passage series, however, is not about a hero, but our ascent leading towards a mysterious realm of higher existence.

About the author
N.G. Meyers is a life-long student of philosophy and English literature, residing in Calgary, Alberta, Canada. To learn more, please visit http://www.elysiumspassage.com.