From the Rubbish Heap to the Great White Way: The unlikely journey of Bash the Trash to Broadway 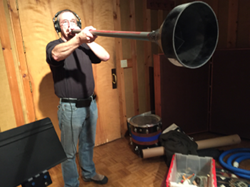 John's ability to craft musical instruments from reused materials was a natural fit given the backdrop of the Broadway musical Once on This Island. When people are forced to use their imagination due to their circumstances, wonderful things can happen.

Bash the Trash Environmental Arts is pleased to announce its inclusion as part of the 2018 Drama Desk Award for Outstanding Orchestrations in the Broadway hit Once on This Island. Annmarie Milazzo, Michael Starobin and John Bertles - the co-director of Bash the Trash and designer of the unique instruments used onstage - are the nominees in this category, with Bash the Trash also recognized. The 63rd annual Drama Desk Awards - hosted by Michael Urie on June 3, 2018 at Town Hall in NYC - are the only awards where Broadway, Off-Broadway and Off-Off-Broadway shows compete in the same categories.

John Bertles composes for combinations of traditional and world instruments along with his invented instrument creations, and is a four-time recipient of the ASCAP Plus Award for Songwriting for Children. Once on This Island is set on a Caribbean isle recovering from a vast storm, so the challenge was to build musical instruments using only the kinds of ocean-borne debris that one would find upon the beach in the aftermath of a natural disaster. With over 91% of plastic waste going un-recycled every year*, there were plenty of materials to choose from; Bash the Trash’s message of science, sound and sustainability is more timely than ever.

According to Carina Piaggio, co-founder of Bash the Trash, “The partnership between the team at Once on This Island and John Bertles made perfect sense. His ability to craft musical instruments from reused materials was a natural fit given the backdrop of the Broadway musical. When people are forced to use their imagination due to their circumstances, wonderful things can happen.”

The migration from the gutter to a Drama Desk Award nomination has been a 30-year journey for Bash the Trash. Their ensemble of 30+ musicians build, perform and educate with musical instruments made from trash and can be found at schools across the Northeast, cultural institutions such as Carnegie Hall and The Kennedy Center, and festivals from Brooklyn to Istanbul to Vancouver. Their hope is to inspire children to discover creative uses for trash to help build a more sustainable future across the globe.

*2017 Global Study by Science Advances Journal: Production, use, and fate of all plastics ever made - http://advances.sciencemag.org/content/3/7/e1700782

About Bash the Trash Environmental Arts
For almost three decades, Bash the Trash has been building, performing and educating with musical instruments made from reused and repurposed materials. The organization features a national roster of over 30 musicians and teaching artists, weaving together science, music and environmental awareness. Bash the Trash offers a full range of services to schools, performing arts centers, museums, festivals and many other venues across the US and the world. For more information, visit http://www.bashthetrash.com or find us on Facebook, Instagram and Twitter.

About Professional Development by John Bertles
John Bertles is an educator, composer and instrument-builder. He has worked in arts education since 1988 as a teaching artist, administrator, professional developer and consultant. A workshop leader with the John F. Kennedy Center for the Performing Arts National Touring Workshops for Teachers, he is also the founder of Bash the Trash Environmental Arts LLC. For more information, visit http://www.bashthetrash.com/professional-development.