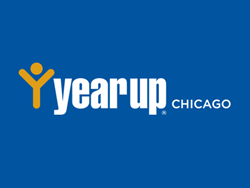 This generous gift from United allows us to begin that expansion at City Colleges, so that more talented young Chicagoans will launch careers at leading Chicago companies like United while earning a college credential.

“Our vision is to grow Year Up Chicago to serve more than 1,000 young adults across the city annually,” said Jack Crowe, Executive Director of Year Up Chicago. “This generous gift from United allows us to begin that expansion at City Colleges, so that more talented young Chicagoans will launch careers at leading Chicago companies like United while earning a college credential.”

United’s investment is expected to grow Year Up Chicago’s reach by 25 percent, helping to close the “Opportunity Divide” and support communities throughout Chicago.

"Connecting our customers to the moments that matter most goes well beyond getting them from point A to point B," said Oscar Munoz, United’s chief executive officer. "We have the opportunity to make lasting, measurable change. We are proud to do our part to help our home here in Chicago, and are excited to share more with each of our hub communities over the coming weeks."

As a first step in the partnership, Year Up Chicago students will pursue college coursework at Harold Washington College to earn a Basic Certificate in Banking, while receiving six months of in-demand career and soft skills training from Year Up, followed by a six-month corporate internship at United or another top company.

“City Colleges students are prepared to enter the workforce as in-demand, highly skilled professionals ready to seize the 21st century job opportunities in today’s global economy," said Mayor Rahm Emanuel. “This collaboration between United Airlines, Year Up and City Colleges of Chicago will provide students with the support they need to graduate and go on to achieve the successful futures they deserve.”

“Chicago has many talented young people eager to pursue careers to better themselves, their families and communities,” said Juan Salgado, chancellor, City Colleges of Chicago. “Through partnerships like this one, we are offering Chicagoans a powerful ‘earn and learn’ experience that offers economic stability, educational opportunity and a path to upward mobility.”

The banking certificate program will prepare the students for internships and entry-level roles in financial operations, banking, and financial client services. Ninety percent of Year Up Chicago graduates are employed and/or enrolled in postsecondary education within four months of completing the yearlong program, with the most recent graduating class posting an average starting salary of more than $38,000/year. Year Up Chicago has served more than 1,080 students to date.

The initial goal is to enroll 160 Year Up Chicago students at Harold Washington College annually.

“Harold Washington College has an untapped workforce pipeline of nearly 13,000 students in the middle of downtown Chicago,” said Dr. Ignacio Lopez, Interim President of HWC. “Year Up will not only help more students connect to careers and their passions, it will also communicate a larger message to surrounding employers about the talent we have right here under our roof.”

Harold Washington College faculty will teach the technical courses, while Year Up staff will lead career development classes covering skills such as interview preparation, resume building and writing, working in a team, interviewing and follow up.

Along with United, dozens of organizations in Chicagoland — including JPMorgan Chase, Bank of America, Northwestern University, Allstate, US Foods, Exelon, Accenture, and Hyatt — turn to Year Up Chicago for bright, motivated entry-level talent in areas such as Information Technology, Financial Operations, Project Management Support, Cyber Security and Sales & Customer Support.

Year Up is actively recruiting young adults, ages 18 to 24 with high school diplomas or GEDs, for the upcoming cycle at the new campus. Admissions information is available at http://www.yearup.org/seize-opportunity.

About Year Up
Year Up is an award-winning, national 501(c)3 organization that provides talented and motivated young adults ages 18-24 with the skills, experience, and support that will empower them to reach their potential through professional careers and higher education. Through a one-year, intensive training program, Year Up utilizes a high support, high expectations model that combines marketable job skills, stipends, coursework eligible for college credit, and corporate internships at more than 250 top companies. Its holistic approach focuses on students' professional and personal development to enable young adults with a viable path to economic self-sufficiency and meaningful careers. Year Up has served more than 19,500 young adults since its founding in 2000, and will serve more than 4,000 young adults in 2018 across 21 U.S. cities in Arizona, Baltimore, Bay Area, Chicago, Dallas/Fort Worth, Greater Atlanta, Greater Boston, Greater Philadelphia, Jacksonville, Los Angeles, National Capital Region, New York City, Providence, Puget Sound, South Florida and Wilmington. Year Up has been voted one of the “Best Non-Profits to Work For” by The NonProfit Times for eight consecutive years, and rated a 4-star charity by Charity Navigator for twelve consecutive years, placing them in the top 1% of tracked organizations. To learn more, visit http://www.yearup.org or follow us (@YearUp) on LinkedIn, Facebook, Instagram and Twitter.