The memo of understanding between the two recreational flight organizations sets the stage for developing programs to draw interest from all ages toward various facets of flight. It will include visibility at major aviation events throughout the country, including EAA AirVenture Oshkosh. 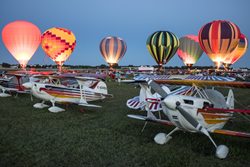 EAA has welcomed participation from balloon pilots through the years, including at EAA AirVenture Oshkosh, the world's largest fly-in.

There is a common passion for flight that connects BFA and EAA, with our organizations sharing many goals and visions.

The Experimental Aircraft Association (EAA) and Balloon Federation of America (BFA) today announced a memorandum of understanding that expands the organizations’ joint efforts to bring the possibilities of flight to more people.

The agreement formalizes a relationship between the organizations as they promote and encourage flying activities. It will also include initiatives ranging from membership growth and communications to advocacy and youth activities.

“There is a common passion for flight that connects BFA and EAA, with our organizations sharing many goals and visions,” said Jack J. Pelton, EAA CEO and Chairman of the Board. “This memo of understanding sets the stage of the next step of cooperation between our associations, as we must work together to sustain and grow interest in all forms of aviation.”

The new memo of understanding also outlines specific areas where EAA and BFA will work together. That includes web and publications presence, and possibilities of joint activities between EAA chapters and BFA’s local clubs. It also encompasses visibility at major events, including EAA AirVenture Oshkosh and the BFA convention.

“The BFA and its members are excited to explore a closer partnership with the EAA and begin work on how both organizations will, in a mutual way, promote and increase aviation participation across all age groups,” said Cheri White, BFA President. “We share so many fundamental principles that working together will benefit all our members and recreational aviation overall. We’re excited to build a close relationship with our friends within EAA.”

EAA and BFA will create a joint working group to further explore possibilities for joint activities and programs that could inspire youth and adults to further explore ways to get involved in model aviation or recreational flying. The agreement also provides for increased visibility of each organization in the other’s outreach and communications channels.

About BFA
The Balloon Federation of America is a 501c3 non-profit association dedicated to the advancement of the sport and science of lighter-than-air aviation, both hot air and gas balloons. Founded in 1961, membership in the BFA is open to anyone who shares a fascination with Lighter Than Air flight. More information is available at http://www.BFA.net.

About EAA
EAA embodies The Spirit of Aviation through the world’s most engaged community of aviation enthusiasts. EAA’s 210,000 members and 900 local chapters enjoy the fun and camaraderie of sharing their passion for flying, building and restoring recreational aircraft. For more information on EAA and its programs, call 800-JOIN-EAA (800-564-6322) or go to http://www.eaa.org. For continual news updates, connect with http://www.twitter.com/EAA.