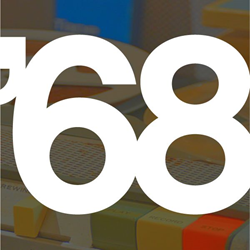 The summer of 1968 was a profound and emotionally moving time for America,. With an authentic an unforgettable score, we’ve created an experience that transcends audiences in time, moving and lifting them by the heartaches, history, and culture of ’68.

Award-winning creators include New York-based Jamie Leo (concept, book and lyrics) and Paul Leschen (music and arrangements). Directing the performance is Joey Murray. Information is available at http://www.68musical.com or at http://www.nymf.org/68.

“The summer of 1968 was a profound and emotionally moving time for America, with baby boomers on the ground in Chicago and in front of TVs witnessing vast scenes of anger and violence,” said Murray, who recently directed a production of the 1960s Hair at Pentangle Arts in Woodstock, Vermont. “With an authentic an unforgettable score, we’ve created an experience that transcends audiences in time, moving and lifting them by the heartaches, history, and culture of ’68. The entire team behind ’68 is thrilled to be invited to the esteemed 2018 New York Musical Festival.”

The story is told through the lens of characters including Chicago research librarians, hotel housekeepers, street cops, campaign volunteers and community organizers. It is insightfully written and beautifully composed by award-winning artists who are also keen observers of politics. Albee Fellow Leo, for example, who said he “stayed very close to my heart and to social activism as I understand it,” has decades of front line and leadership work with social justice advocacy.

Leo said that his observations are “airborne by composer Paul Leschen's exquisite and raw melodies, allowing ’68 to present a portrait of America firmly grounded in the present and looking forward to a shared future. It’s a narrative, a eulogy, and a celebration of struggle as suggestive of current events as a look into a time capsule.”

Leo recently directed a revival of Deb Margolin’s Critical Mass and performed his Long Day in a Bad Shirt monologues with real-time projected animations at Dixon Place. For the Henson Foundation, he developed a groundbreaking piece of puppetry work at St. Ann’s Warehouse. His solo work The Night Hides a World, is based on his invitation to speak at the University of Tehran. His new play What You Call The Dark is in development and was read at New York Theatre Workshop in March.

Leschen was nominated for his score for Sleep Tight by NY Innovative Theatre Awards, and for a Drama Desk for Outstanding Music for Twist. A frequent collaborator with Scissor Sisters, his co-arrangement of “Comfortably Numb” was a massive hit. Paul has worked with Hedda Lettuce, Murray Hill, and other genderbenders and has a band, Kingship, with singer/co-writer Chris Hall. Paul’s collaboration with Fred Sauter has yielded The Astronaut Love Show and Karma Kills.

Information for ’68 – a new American musical

Location:
The 2018 NYMF will take place July 9 through August 5 at the Acorn Theatre at 410 W 42nd Street in New York. Watch for details at http://www.68musical.com and http://www.nymf.org.

About New York Musical Festival -- http://www.nymf.org
The New York Musical Festival (NYMF) nurtures the creation, production, and public presentation of stylistically, thematically, and culturally diverse new musicals to ensure the future vitality of musical theater. Now in its fifteenth year, the Festival is the premier musical theater event in the world. The preeminent site for launching new musicals and discovering new talent, the NYMF provides an affordable platform for artists to mount professional productions that reach their peers, industry leaders, and musical theater fans. More than 90 Festival shows have gone on to productions on and Off-Broadway, in regional theaters in all 50 states, and in more than 20 countries worldwide. Festival alumni have received a wide array of awards including the Tony Award and the Pulitzer Prize. In 2013, NYMF received a special Drama Desk Award in recognition of its work "creating and nurturing new musical theater, ensuring the future of this essential art form." New York Musical Festival, a 501(c) (3) not-for-profit organization is supported, in part, by an award from the National Endowment for the Arts, by public funds from the New York City Department of Cultural Affairs, and by the New York State Council on the Arts, a state agency.