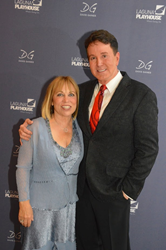 “A big thank you to Gala Honorees Jared Mathis (great-grandson of Nellie Gail Moulton) and the Moulton Family for announcing their $1 million gift toward renovations which will restore the beauty and vitality of the Moulton Theatre,” said Ellen Richard, Laguna Playhouse Executive Director.

The Laguna Playhouse raised $1.7 Million at their annual gala held on May 12, 2018 at Island Hotel in Newport Beach, California. Attended by 400 playhouse patrons, the sold-out event featured a VIP Sponsors Reception, an elegant dinner, live and silent auction, entertainment and a special performance by “Phantom of the Opera” star Davis Gaines. Honored at the event were the Moulton Family and South Coast Plaza.

“A big thank you to Gala Honorees Jared Mathis (great-grandson of Nellie Gail Moulton) and the Moulton Family for announcing their $1 million gift toward renovations which will restore the beauty and vitality of the Moulton Theatre,” said Ellen Richard, Laguna Playhouse Executive Director. The one-million-dollar gift by the Moulton Family was inspired by the generosity of the City of Laguna Beach providing a grant for improvements over five years and the family’s desire to reflect its appreciation of the city with their gift.

The Island Hotel was transformed into a glamorous backdrop to this memorable and inspiring evening which began with a VIP Sponsors Reception and private performance by “Phantom of the Opera Star” Davis Gaines, who continued to entertain guests throughout the night with his powerful voice. Members of the Playhouse Youth Theatre Conservatory joined Gaines in performing “Day by Day”.

Chair of the Board of Trustees Paul Singarella kicked off the honoree portion of the night with a historical introduction about the Moultons. He welcomed Mathis to the stage, while a historical video played which provided a unique glimpse into how the nearly 100-year-old theatre came to be. It paid tribute to a pioneer of the arts and philanthropist, Nellie Gail Moulton, the major benefactor to the building of Laguna Playhouse’s Moulton Theatre.

South Coast Plaza also received recognition and was honored for its role since its creation 50 years ago in supporting arts, theatre and culture throughout Orange County.

It was 1966, 50 years ago, when Nellie Gail Moulton was approached to help fund the building of the now 420 seat Moulton Theatre named after her husband Lewis F. Moulton. Donating a large principal amount of the $400,000 needed to build the theatre, Nellie Gail not only served as the major benefactor of the theatre, she co-founded the Laguna College of Art and Design served as President of the Laguna Art Museum. Nellie Gail was a major catalyst for the creation of an arts community in Laguna Beach. Today, the Moulton family fulfills her legacy through their commitment to Laguna Playhouse and the entire Laguna Arts Community.

Co-chaired by Laguna Playhouse Season Producer Lisa Hale, Annee Della Donna and Board of Trustee Jamie Walters El Erian, were intricately involved in every aspect of the gala. “Each of us began our love for Laguna Playhouse through the Youth Theatre conservatory and its programs,” noted the co-chairs. Major Sponsors for the event were South Coast Plaza, Lisa Hale, Joe Hanauer, Jamie El-Erian, Nolet’s Spirits, Greg and Barbara MacGillivray, Heather and Paul Singarella.

For more information about the Laguna Playhouse, please visit http://www.lagunaplayhouse.com. For media inquiries, contact Kelly Bennett, at Bennett Productions Unlimited at (949) 463-6383 or Kelly(at)bpunlimited.com.

About Laguna Playhouse:
Founded in 1920, the historic Laguna Playhouse is one of the oldest continuously-operating not-for-profit theatres on the West Coast and is proud to be an active participant in the celebrated Laguna Beach arts community. From classic plays and musical comedies to the current off-Broadway smash, cutting edge and traditional music exhibitions, dance festivals and stand-up comedy performances, Laguna Playhouse brings the magical experience of the performing arts direct to over 80,000 patrons each season. A member of the League of Resident Theatres, Laguna Playhouse is also home to the annual Laguna Dance Festival, Laguna Beach Music Festival and Laguna Beach Concert Band.

Laguna Playhouse educational programming includes year-round classes, productions by and for children and teens (Youth Theatre) and is one of the few companies in the region that offer a curriculum-based professional theatre-touring program, TheatreReach, which aligns with the California State Standards for literature, history and performing arts curriculum.

Serving more than 80,000 patrons each season, Laguna Playhouse has been recognized in 2016 and 2015 as one of Orange County Register’s “Best of OC” in the category of Live Theatre. The Playhouse has featured many talented performers on stage, including Leslie Caron, Val Kilmer, Ed Asner, Hershey Felder, Donna McKechnie, Rita Rudner, violinist Joshua Bell, Lee Rocker, ballerina Misty Copeland, Harrison Ford, and Bette Davis. Learn What’s Going On at http://www.lagunaplayhouse.com.

Playhouse Board Chairman Paul Singarella with Kate and Jared Mathis, members of the Moulton Family who announced a pledge of $1 Million toward the building refresh.

What a thrill for the kids. Laguna Playhouse Youth Theatre Conservatory members performed the song "Bay by Day" with Davis Gaines for gala guests.