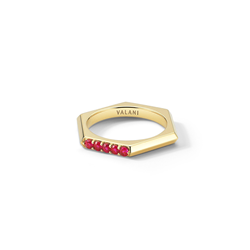 A deliberate form and vibrant ruby celebrates July’s birthstone in the most unexpected way. Ruby being the rarest of all gemstones, is an essential for every Valani woman’s wardrobe.

Shah says of her inspiration, “A deliberate form and vibrant ruby celebrates July’s birthstone in the most unexpected way. Ruby being the rarest of all gemstones, is an essential for every Valani woman’s wardrobe.”

The Arris ruby drop earrings feature the gem in a three-prong setting, set on a geometric textured base, upon a high-polish, high-contrast dagger drop. Edgy, yet sophisticated, these drops can be worn alone, or layered alongside the new Vi II ruby ear cuff. The latter makes a statement without making a fuss. Easy to slip on, the ear cuff fits restfully along the lobe, adjusting to any ear. Its modern double bar design features high polish 18K yellow gold, also with a three-prong pear ruby setting. Lined with a row of diamonds, Valani Atelier’s ear cuff adds an unexpected sparkle and pop of color.

A symbol of passion, power, and energy, Ruby is highly regarded as one of the most desirable gemstones in the world. An amulet of protection, closely associated with the heart, Heena embraces ruby history and meaning, updating and infusing it into modern, wearable accessories.

Shah’s popular Hexa rings are also introducing new ruby styles, Hexa I, with a singular, central ruby, and Hexa V, with its red color burst of five rubies side-by-side. Worn alone, or stacked, Hexa rings can be mixed and matched, or styled to rest on each finger to make a statement. Sitting comfortably on the hand by sitting flush with the surface, Hexa rings are convenient for typing and writing, desirable for fashionable working women.

The Vohk ruby collection has added a gold chain bracelet, featuring 2.5mm round rubies in a high polish, gold, raised kite setting. Playing with space, links incorporate both the rubies, and the kite itself as a cut-out, adding a subtle modern touch.

“Vivid red rubies in a strong silhouette embrace individuality and sophistication all at once. The Valani woman who chooses to wear ruby is distinctive, decisive and provocative. She is bored of commercial fashion imagery, fed up with being force-fed traditional beauty standards. She resonates with rubies because they are just as distinct, passionate and intriguing as she is,” says Heena Shah.

For more information about Valani Atelier, visit http://www.valani.com, call 212-702-9703, or contact Valani Atelier through their contact page. For questions regarding this release, contact Olga Gonzalez at info(at)pietrapr(dot)com or call 212-913-9761.

ABOUT HEENA CHHEDA SHAH
Valani Atelier Co-Founder and Creative Director Heena Chheda Shah is the youngest jewelry designer to have won prestigious AGTA Spectrum, Platinum Guild, and Women’s Jewelry Association Awards three years in a row. She has trained at the Gemological Institute of America and has a background in industrial engineering, having worked at Michelin in Lyon, France, Google in San Francisco, and as a consultant in New York City.

ABOUT VALANI ATELIER
Based in New York, Valani Atelier sells 18 Karat gold jewelry set with rubies, emeralds, sapphires, and pearls sourced directly from mining centers in Brazil, Colombia, Zambia, Mozambique, and Japan. Following the traditions of craftsmanship perfected by generations of Italian goldsmiths, the results are masterfully executed pieces that combine a heritage of artistry and striking design.